Elephone have released real photos of their Elephone M3 model, but is it as handsome as the previous renders promised.

I know it is hard to keep up with Elephone and their phones, so to recap the Elephone M3 is meant to launch in both standard M3 Spec and high-end Elephone M3 , Update: Elephone say the high-end version will not be called the M3 Pro, just simply M3. 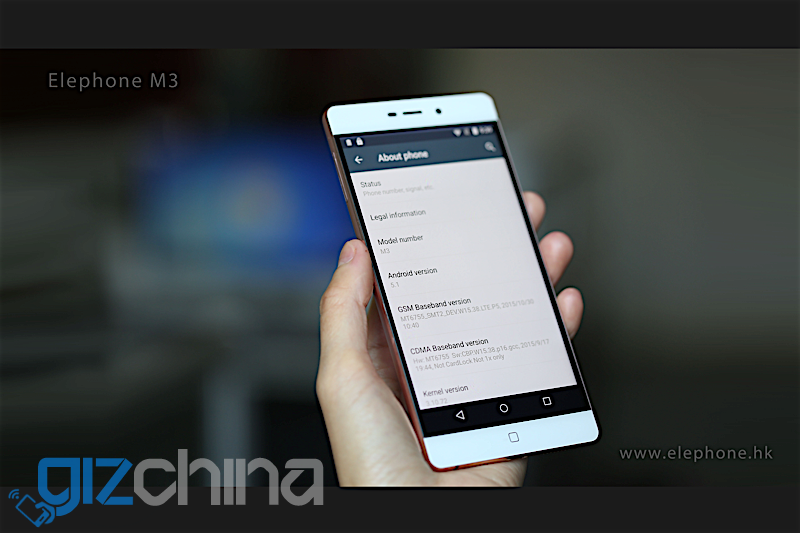 Previously the only visual evidence of the phones were renders that showed a metal phone with slim body not too different from the Elephone M2, and in turn current Oppo phones, but real photos of the phone show a slightly thicker design

From the front the M3 has a black border around the screen and we also see that this version has onscreen buttons. Usually development phones show on screen buttons while production models use capacitive buttons and we believe that this is the case here.

The photo showing the rear of the phone actually shows a phone that is slightly thicker than we were previously hoping for. The Elephone M3 has a metal body, but it looks like there is an additional bulge on the rear and the camera also protrudes slightly. Hopefully this means a huge battery is inside, or it is simply a trick of the light.

Other photos show a stock Android install (which we hope the phone ships with rather than Ele UI) and a settings page photo shows the phone running Android 5.1, however an Android 6 M update is promised.

What do you think of the latest all metal phone from Elephone? Are there any features you hope this phone will come with?