After reports yesterday that Xiaomi would release a curved display version of the Xiaomi Mi5 a purported leaked photo of the phone has made it online.

We reported yesterday that Xiaomi could be building two versions of the Xiaomi Mi5. A model with 3GB RAM would feature a curved glass display, while a 4GB RAM model might feature a more traditional design and all metal body.

That news continues today with the release of this hands on photo of a Xiaomi branded device with a physical home button and curved front (above).

While our sources told us that the glass panel on the front of the Mi5 would features a similar curve to the Galaxy S6 Edge, this leaked image shows a much shallower curve to it. The image also shows a standard bezel design, an alloy chassis and IR remote in the top of the unit. 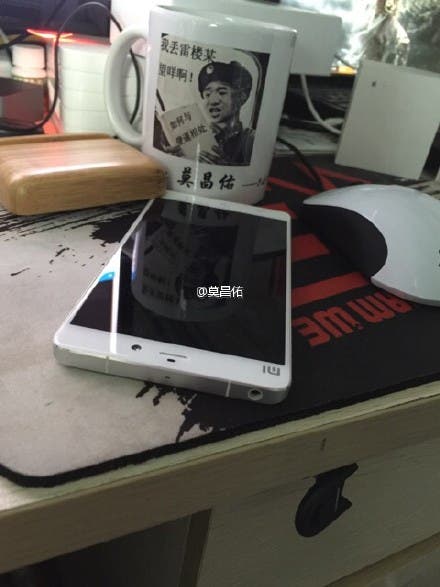 The second leaked image is believed to be of the higher spec 4GB RAM 64GB memory version of the Xiaomi Mi5 with a flat display and different alloy chassis.

A physical home button is believed to have a fingerprint scanner behind it and incorporate new biometric features from Qualcomm.

The Xiaomi Mi5 is believed to launch on the 22nd of Feb with Snapdragon 820 chipset, 5.2-inch display, 13 mega-pixel front camera and 16 mega-pixel rear.