Mediatek have posted a statement saying that the Helio X10 chipset does not have WIFI problems and that environmental issues are to blame.

Last year when we reviewed the LeTV Le1 (X600) we later discovered the phone had WIFI issues. In our case an update to an experimental version of the ROM fixed the problem but not everyone has been so lucky.

Owners of the Xiaomi Redmi Note (2 and 3) and Meizu Metal have also been posting their frustration with glitchy WIFI performance on Chinese forums too. The issue doesn’t seem to affect everyone, but it has become widespread enough for Mediatek to make an official comment.

In the official announcement Mediatek don’t admit that there is an issue with their chip but say that environmental issues are to blame. As many users have other phones on hand with working WIFI, and complaints only occur during certain system updates, customers aren’t accepting Mediatek’s excuse. 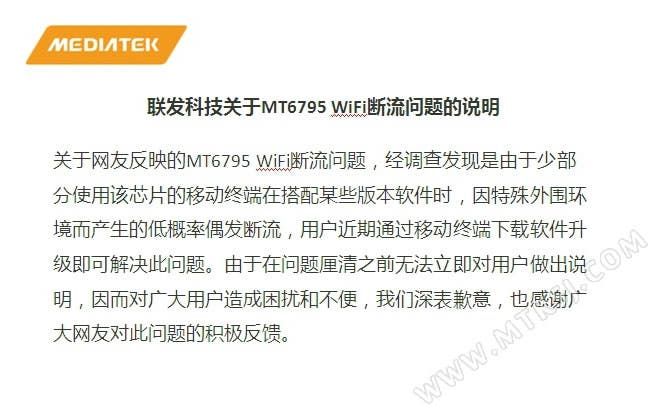 If you are suffering the issue Mediatek’s solution is to ensure that your phone is updated to the latest firmware, and if this works we can assume a patch has been added to fix this none existent issue.

Is your Meizu MX5, Meizu Metal, Le1, Le1S, Xiaomi Redmi Note 2 or Redmi Note 3 have poor WIFI performance? Or is it possible that the sheer number of X10 phones are the reason for the high WIFI complaints?