ZUK promised a lot when they started up last year. Their first (and only) phone, the Z1 (review here) was quite an interesting one; it didn’t want itself to be seen as a flagship phone for everyone. Instead, it was a phone meant for geeks with a sense of style (as the wooden rear covers would suggest).

Anyway, we’re almost halfway into 2016 (sudden realisation?), and its time for the next ZUK. In line with previous rumours, the next-in-line ZUK, the Z2 Pro, could likely go official next week.

This time around, ZUK are aiming for the stars.

What suggests that is the inclusion of the Snapdragon 820 SoC, which can safely be regarded as a chipset reserved for flagships — at least in 2016. 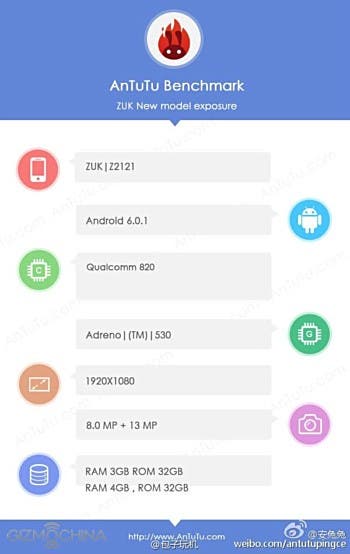 Let’s be a little crude now. The phone was leaked on AnTuTu with a model number Z2121. What was spotted also was the mention of a couple different spec sets; 3GB/32GB and 4GB/64GB respectively (RAM/ROM).

Other specs of the ZUK Z2 Pro include a 13 mega-pixel rear snapper, an 8 mega-pixel front camera, and an Android 6.0.1 installation as stock.

It isn’t clear if the ZUK Z2 and the Z2 Pro are one and the same. If this leak has any truth to it, we should know in a week’s time.

UMIDIGI Z2 Pro VS Samsung Note 9 – Is it worth over 3 times the price?

UMIDIGI Z2 Pro VS Huawei P20 Pro – How Much Should You Pay for a Flagship Phone? (Video)