This review has been a long time coming for various reasons but it’s finally here. Keep reading for my full ZUK Z1 review.

Due to various reasons this review was pushed back further than we had hoped. I was at the launch of the ZUK Z1 but that phone was given to us running the Chinese ZUI ROM but really the phone isn’t that great with the ZUI. So then I had to wait for CM to release, and it did while I was at IFA. Finally I managed to brick my Z1 when installing CM (due to an issue with the Qualcomm tool not wanting to run on Virtual Box).

Anyway I have a replacement phone, it has the right ROM and its the grey model too. The ZUK Z1 review follows. 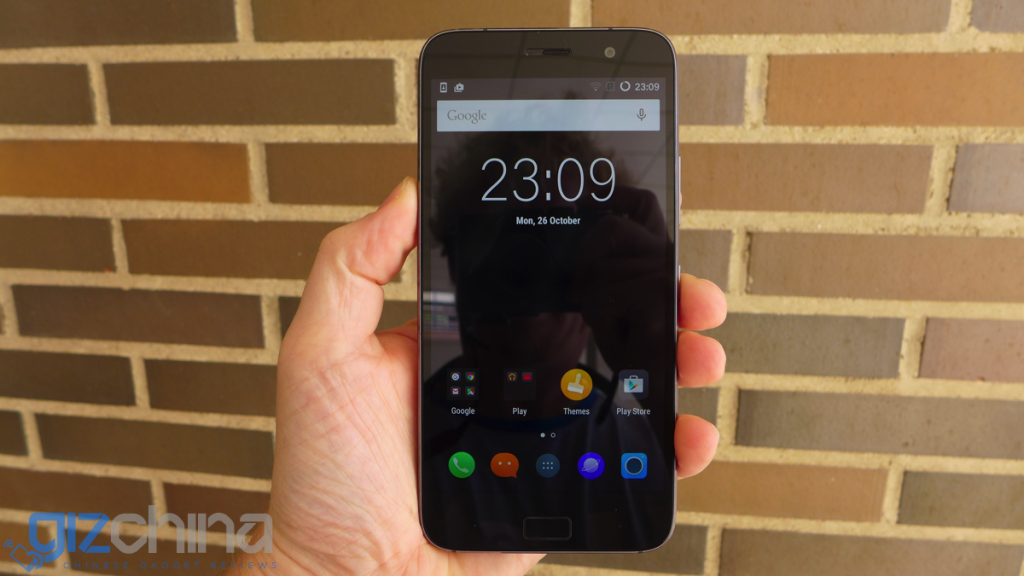 If I was to be polite about the ZUK Z1 then I would say that the phone is simple and understated, but I’m not going to beat around the bush with pleasantries. The Z1 is by far the most bland looking device I have laid eyes on in recent years. There is nothing that makes the phone standout from the crowd and it’s not going to impress your friends on looks alone. 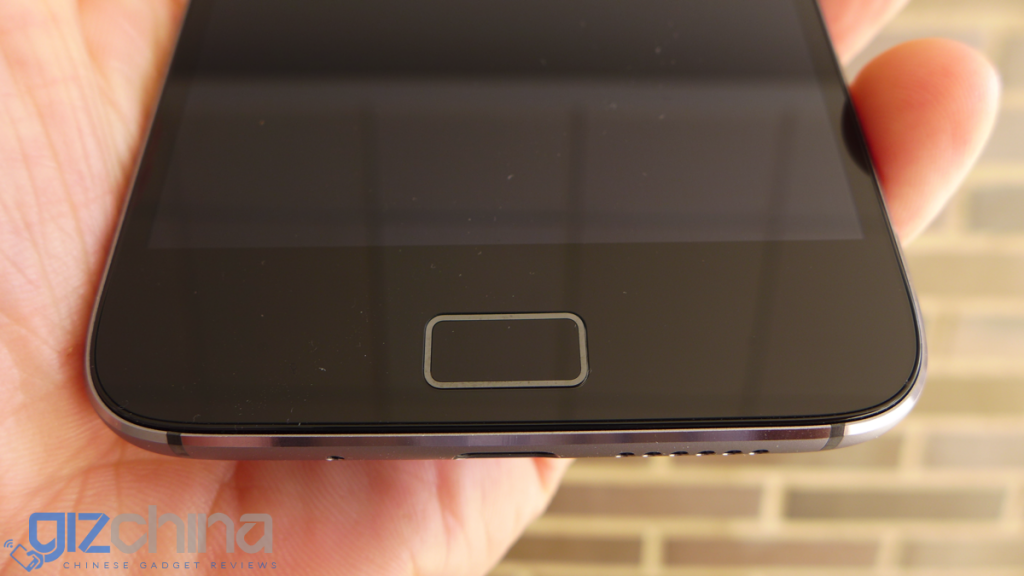 The ZUK team have created a unibody phone with alloy chassis, narrow bezels and 5.5-inch FHD display with an off-centre physical home button on the chin. The physical home button looks out of place as it sits closer to the bottom of the phone than the screen, but also because it is more angular than the curved device it sits on. 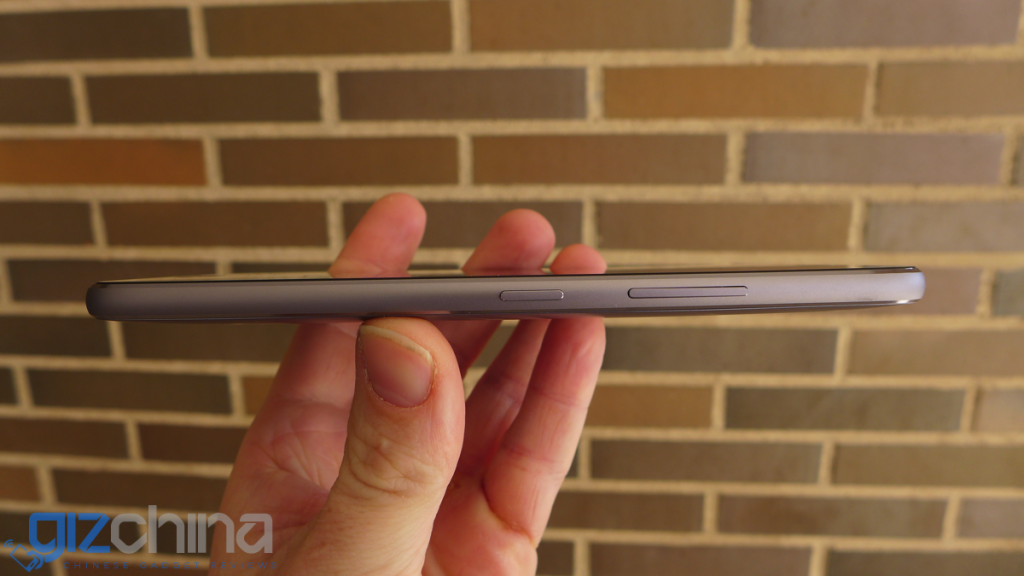 An alloy chassis separates the glass on the front from the plastic on the rear, and has space for the Type C USB port in the base (with speaker to the right), SIM tray on the left, power and volume buttons on the right and 3.5mm headphone jack in the top. Speaking of the headphone jack, you can also plug a set of USB Type C headphones in the USB too so too people can listen to the phone at once. 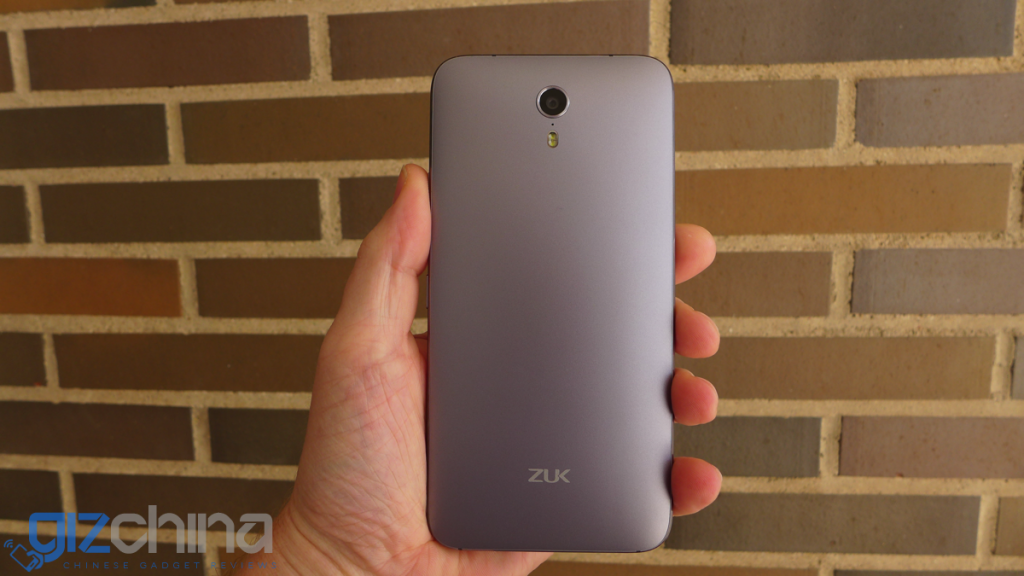 The metal frame is curved in the middle and has a bevel at the front and rear. To the rear the bevel leads its way on to the rear plastic cover where you will discover the lens for a 13 mega-pixel main camera, dual LED flash and ZUK logo.

8.9mm, is quite thick for a smartphone, but in this case we can totally understand why the Z1 is a little fatter than usual, in addition to a dual nano SIM tray there is also a 4100mAh battery inside that gives the phone killer battery life (around 6 hours of gaming in my tests).

ZUK offer the Z1 in either white or grey (there are also rumours of a gold model too). If it was my money then I would opt for the grey version, with black front. The dark colours means the metal frame and metal borders around the home button and camera, stand out and give it a more flashy look and feel.

So the ZUK Z1 is a bit of a plain Jane, but looks are not what this phone is about. 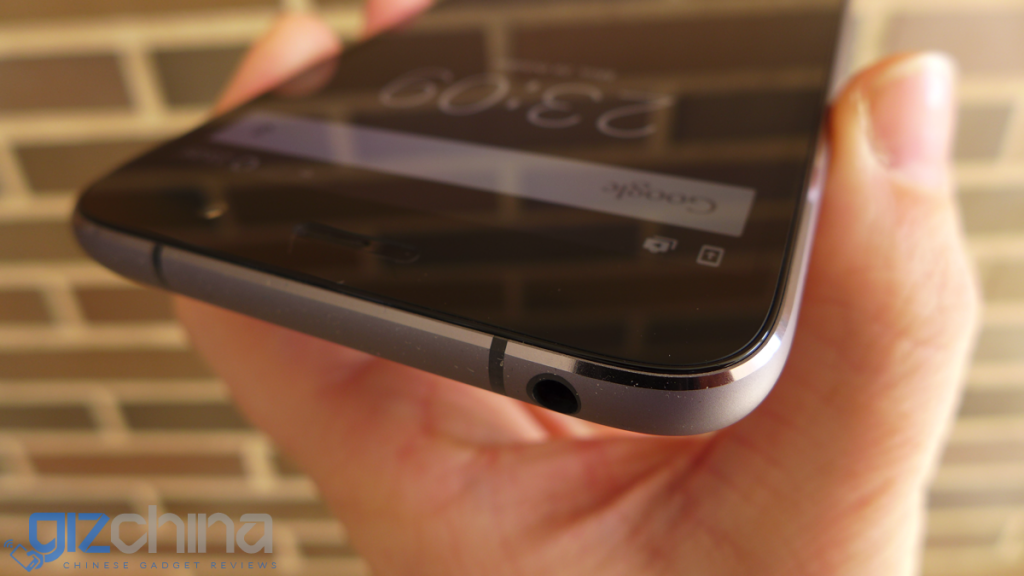 There are people who say that the SD801 is too old to be in a flagship phone, but I don’t agree with them. I still have SD801 phones in use today that feel just as fast as newer devices and they stay cooler too. Sure benchmarks are more impressive on a SD810, but real world differences are negligible.

When I met with ZUK at their international launch they told me the Z1 was made for heavy users in mind, this is why they concentrated on hardware first and design second. They also say this is the reason for having 64GB as standard and mounting a 4100mAh battery inside. That battery might not be as large as some in other phones (the BV5000 has a 5000mAh for example) but in my tests you aren’t ever going to wish you had a bigger cell in the Z1. 2 days on a single charge is not uncommon with the Z1 and that’s with some serious game time thrown in to the mix!

Audio isn’t a feature that ZUK promote on the Z1 but it is rather good. I have only used the 3.5mm headphone jack (usb headphones don’t come with the international version of the phone) but audio through earphones is really enjoyable. Audio as standard on the ZUI model is good, but it’s even better on the international model due to CM’s built-in AudioFX system. 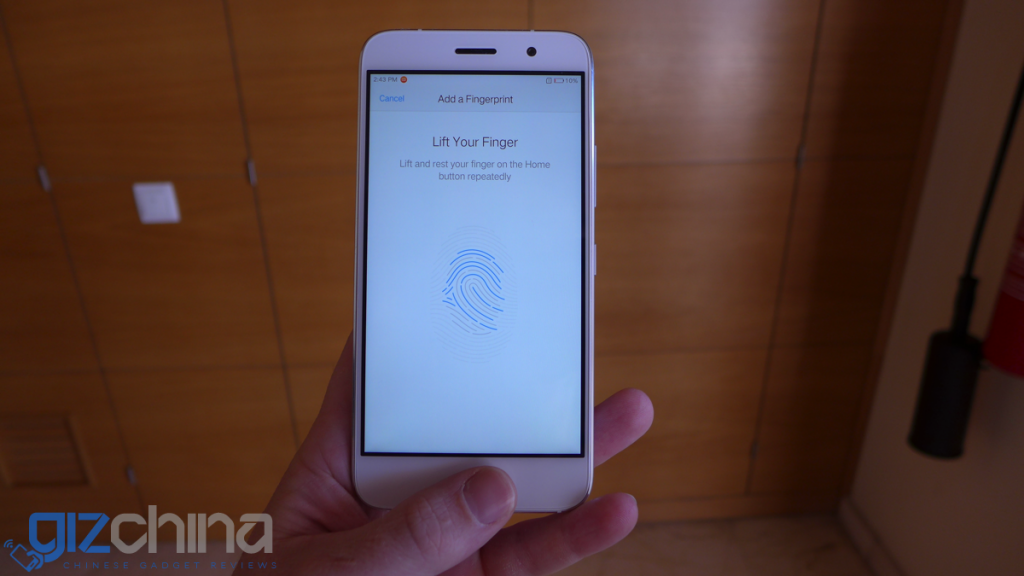 Security has been a big deal this year and most smartphones now come with a fingerprint scanner of some description. The ZUK Z1 has a scanner under a physical home button, pressing the button with the fingerprint that you have set up will unlock the phone. Accuracy and speed is good, I would say better than the OnePlus 2 overall.

There is no micro SD card slot on the Z1, but with 64GB memory as standard we feel that this is more than enough for even heavy users. Also the battery is none removable but again 4100mAh and 2 days of use is not to be sniffed at.

Are there issues? Well some users have reported problems with WIFI and others have said that applications force close from time to time or the phone might randomly reboot. These are issues that Cyanogen will work on fixing, and with CM on the case we should frequent updates.

Being a machine made for gaming and heavy usage you would expect benchmarks to rival the hottest machines of today. In benchmarks though the ZUK Z1 isn’t quite up there with the likes of the OnePlus 2 or LeTV LeMax, but it still offers impressive scores, and more importantly can handle even the most advanced games you can throw at it. 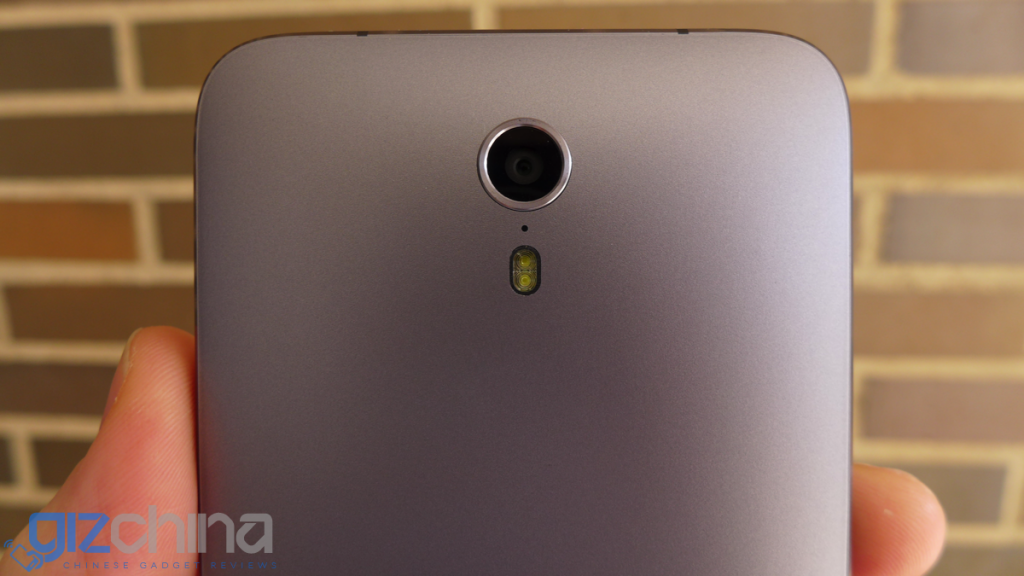 With Cyanogen on the ZUK Z1 you have a lot more to play about with in the camera application. The app itself is similar to how the camera app was on the OnePlus One, so swiping up and down brings up the different settings.

Compared to the OnePlus 2 or Xiaomi Mi Note, the camera on the ZUK Z1 is slightly off the mark, but overall its a decent performer and produces good photos most of the time. Speed of the camera is good, although HDR photos are slightly slower to process and save when compared to other phones.

Cyanogen are an official partner to ZUK so the system on the international phone is the official CyanogenOS system not the Cyanogen ROM that other Chinese phone makers offer on their devices. This differences between the two are the CM ROM is an open source project relying on fans and third party developers to grow, while CyanogenOS is handled by the Cyanogen company with guaranteed updates.

So for I’ve had a few OTA updates which have added to the stability of the phone, and overall I’m happy with the system, which is basically a tweaked version of vanilla Android with some added security features, and custom CM apps.

CM really does improve the phone as a whole. I barely like the ZUK Z1 with ZUI but the international model with CM is a much nicer device, with more useful features and a more user friendly UI.

Before buying the ZUK Z1 you need to ask yourself what is important to you when buying a phone. If you want the latest processor and highest benchmarks then obviously the Z1 isn’t for you, but you would be silly to base your buying decision on this. 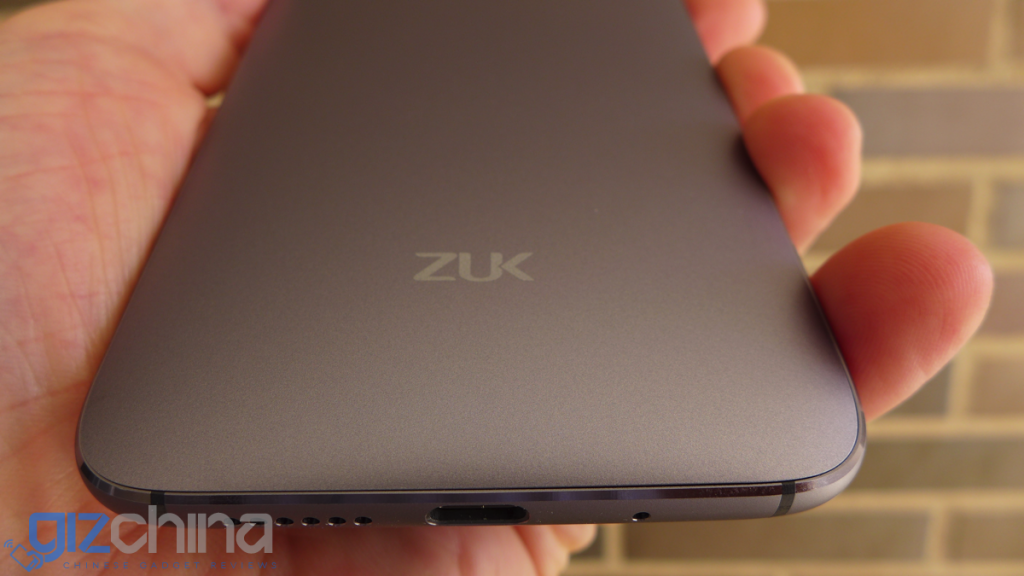 If on the other hand you want a phone with killer battery life, solid build, the latest standard USB, great gaming performance, a ton of internal memory, decent camera and updates handed by Cyanogen then the ZUK Z1 is the phone to buy. Heavy gamers and hardcore users will be hard pushed to find a Chinese device that offers so much.

The ZUK Z1 is available through numerous online stores, we received our grey international version from shop.gizchina.com where it is available for EU customers and comes with a 24 month warranty for just $299.99.