The midrange new Huawei device has just arrived and the Huawei G9 Lite chinese launch offered nothing shocking  but still one surprise and some tiny deviations from our latest leaks coverage article. So let’s get to it.

Huawei G9 Lite can’t deny belonging in the beautiful P9 family and has the very same 7.5mm thin body with curved edges, but the midranger took a hit with offering only the metal frame and plastic back cover instead of full metal P9. Gone is also the dual-camera setup of the P9 and the phone has only the single 13 MPix rear shooter available. 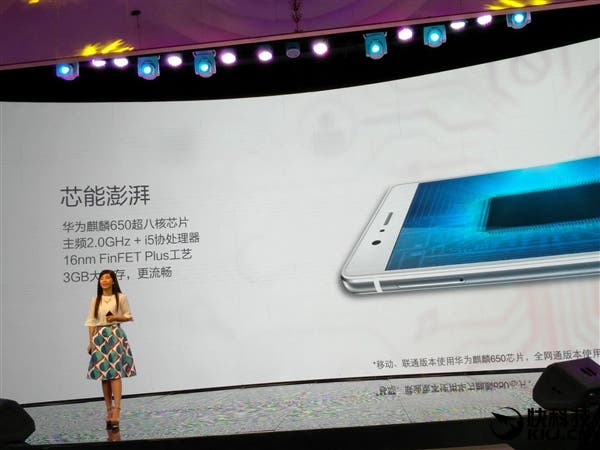 The display is 5.2-inch FHD one and the used processor is octa-core Kirin 650 clocked at 2 GHz paired with 3 GB RAM and 16 GB of storage (expandable up to 128 GB). Front camera is a 8 MPix snapper and the phone features also new tech rear fingeprint scanner with 0.5s unlock speed. Battery capacity should be 3000 mAh so slightly higher than we previously reported and the company EMUI 4.1 is slapped on top of Android 6.0 Marshmallow.

What comes as a suprise though is a parallel version for a chinese mobile operator coming with Snadpdragon 617 processor instead of the Kirin 650 and aside of that exactly the same specs. The Kirin version is going to be available for 1599 yuan (245$) and the Snapdragon one for 1699 yuan (261$). Both should be up for grabs starting May 13th and probably limited only to China, because after all it’s just rebranded P9 Lite for international markets. Worth mentioning are also the color variants, because among the five offered options you can see pretty rare something like an amethyst one.

I’m personally still somewhat baffled by the extreme similarities to the Honor 5C and while i understand the point of differentiating the “premium” and “value” company lines it just seems weird. Paying almost double for virtually the same hardware and arguably even worse build is just silly and i’m afraid the Honor 5C sales will cannibalize quite some portion of the G9 Lite market share.