Not that long ago we have reviewed the budget warrior Blackview A8 and for $55 it actually didn’t leave a bad impression. But Blackview moguls have eyes on even more accessible device so say hello to the ultra-budget Blackview A5 Review with an absurd $40 price tag

For such price there is virtually zero expectation about the phone and personally i received it with an sarcastic smirk and half-expecting to crumble to dust upon touching or exploding after the first powering on.

Of course nothing of that sort happened and the Blackview A5 gave its best to handle all the poke and prod treatment. So how did the dirt cheap phone impress ?

Simple small white box with the company logo on the cover and sides is really nothing to write home about and hardly anything inspiring. In the same manner continues the first impressions upon unpacking, no design shenanigans and just pure utilitarism. Accessories packaged inside are pretty basic, but at least extra crappy headphones included for good measure. Phone itself came already in a silicone cover, which is a nice touch considering the extra low price level. 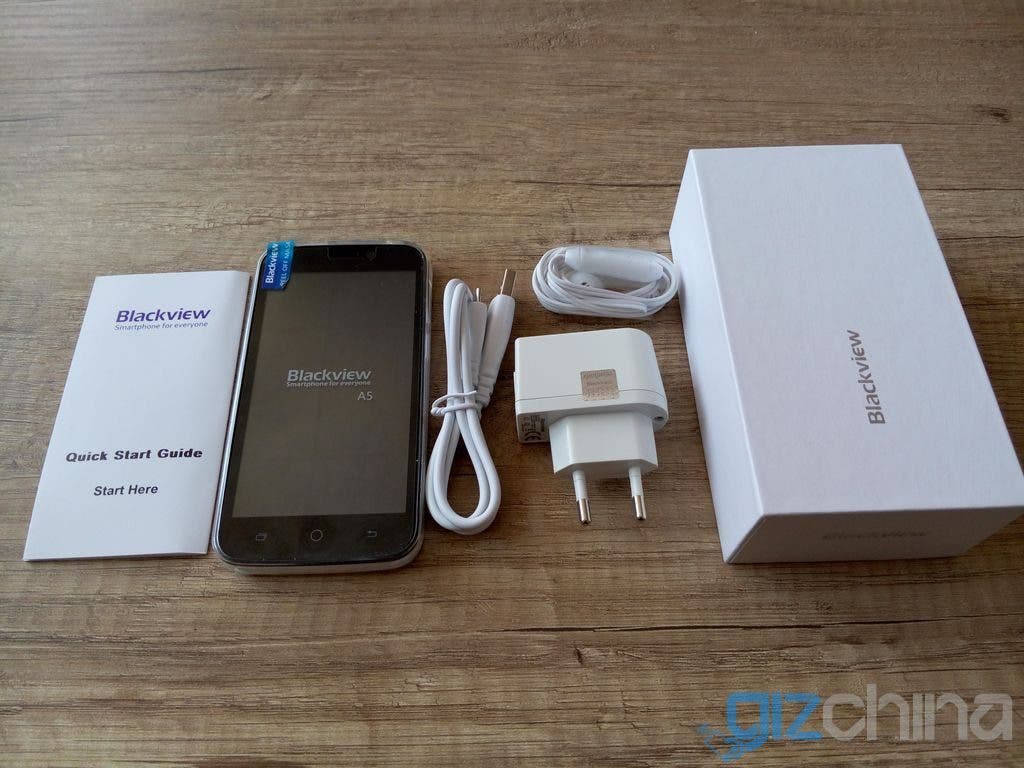 Blackview decided to forget everything about the metal build of their previous phones and the A5 is fully plastic body device, which isn’t necessarily a bad thing. The phone feels pretty sturdy and quite comfy to hold thanks to the curved back. Don’t expect any slim design beast though, with 9.5 mm thickness it is bulky and certainly not too light either with 135 g.

Phone is pretty compact and for today’s standard actually small with the 4.5-inch display and this time Blackview also didn’t use any sort of the “a la LeTV” fake bezels around the screen. What you see is what you get and the black bezels, while surely not as thin as on the Blackview promo pics on their website, are quite alright. No 2.5D curving either, cutting costs to bare bones apparently denies that. Under the display itself you can find the usual trio of the capacitative control buttons. 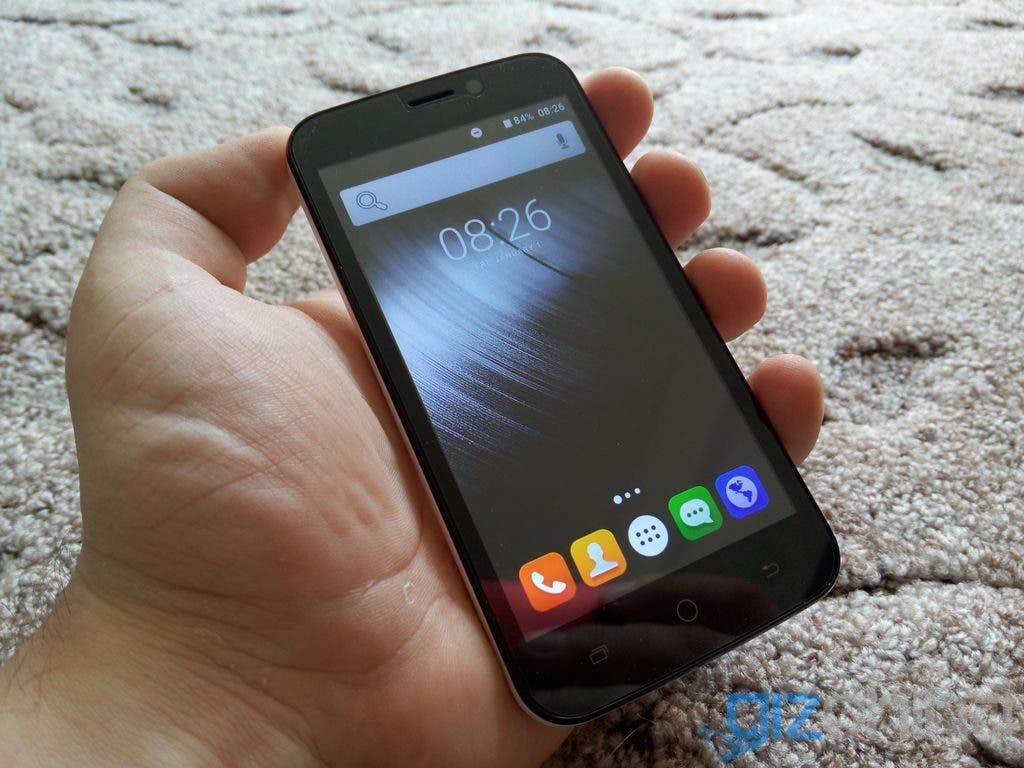 As mentioned before the chassis is fully plastic and on the right side you can find the usual power and volume buttons, which deserve some praise for not being “wobbly” at all  and some criticism for being too recessed for comfortable control. MicroUSB and 3.5mm headphone jack are on the top and i’m not a fan of this solution, personally i always prefer the charging connector on the bottom. But with A5 you can find only the necessary microphone on the bottom.

The rear removable panel comes with a tile texture on it and it’s suprisingly pleasant to hold it and actually also doesn’t look half bad. Our review unit came with the pearl white texture, but there are also sky blue and violet black available. The lens of the top central located camera is very slightly protruding and to the left of it you can find the single LED flash. In the bottom right then pretty small speaker grill and the company logo above it.

Removing the panel reveals the removable 2000 mAh battery, two microSIM slots and one microSD slot. Small reminder for the users, always first remove the safety sticker from the battery before trying turning the phone on for the first time, you will save yourself from a fit of rage over the “non-functioning” phone.

Blackview A5 comes with 4.5-inch IPS display and just 854×480 pixel resolution, which is really not up to standards, but the matrix isn’t really visible too much. Another disappointment is the multitouch ability, because it can simultaneously register only two fingers. That can cause problems with controls and gaming sometimes so certainly a big minus. The display isn’t too bright and the sun legibility outside is pretty poor, but that has to be expected from such cheap IPS display. Due to missing sensors their is also no automatic brightness setting, so you will always need to adjust the desired brightness level manually. 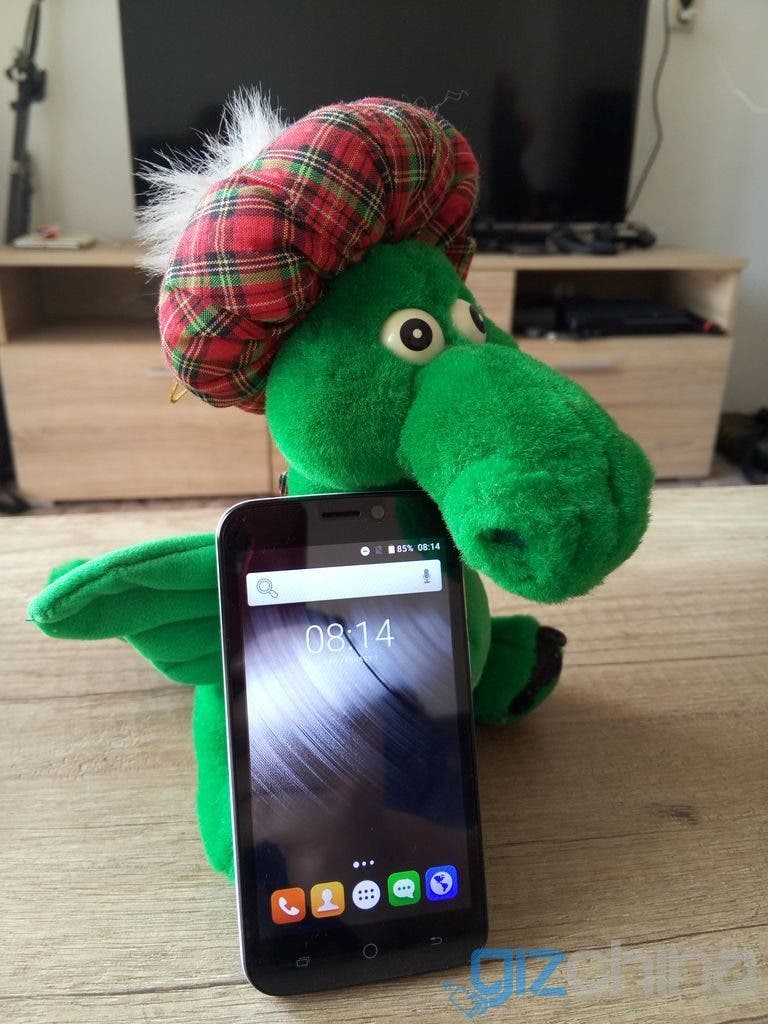 These days the usual suspect for the budget phone’s processor is the quad-core MT6580M and Blackview A5 delivers just that, clocked at 1.3 GHz and embedding the Mali-400 GPU. Memory is kind of lacking and with mere 1 GB RAM and 8 GB of internal storage it feels just half-naked, but at least you can expand the storage with up to 32 GB microSD card. 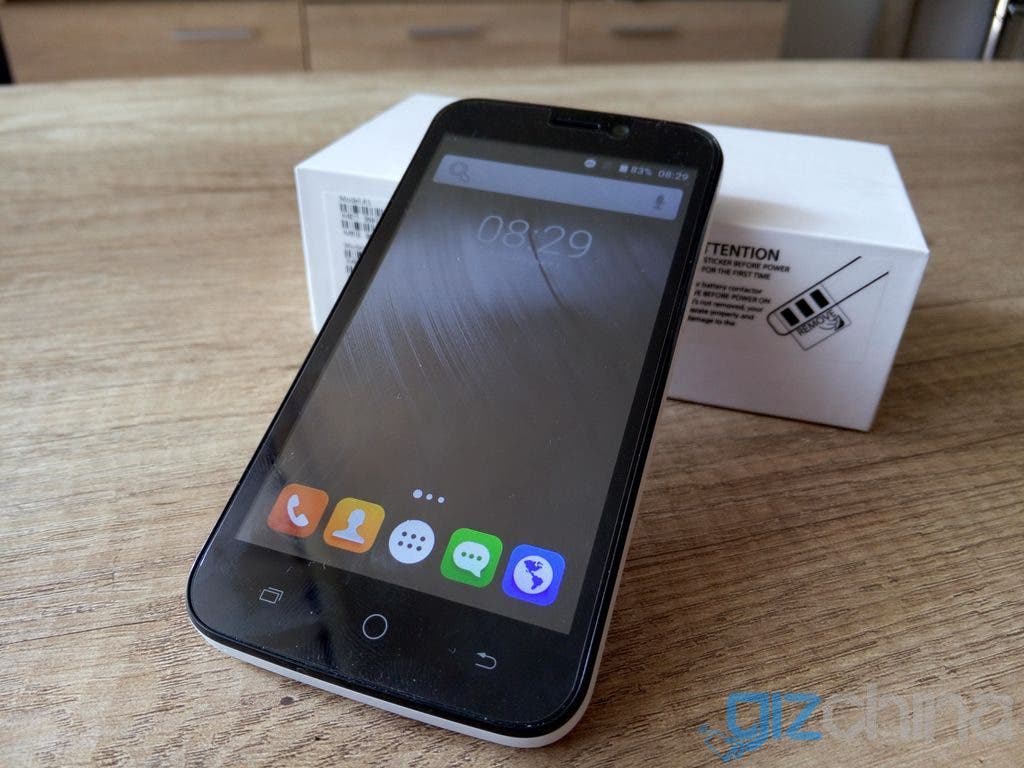 Cameras duo consists of rear 5 MPix SP5409 sensor interpolated to 8 MPix and the front selfie shooter works with 2 MPix sensor interpolated to 5 MPix. The main shooter has f/2.8 aperture and while the promo materials lavish heaps of praise upon it the reality is pretty grim as you will see in the following dedicated camera chapter.

Blackview A5 is packing pretty much clean version of the Android 6.0 Marshmallow out of the box with some small UI icon skin on top of it with very similar look to Oukitel one. The Android experience is pretty smooth, or as smooth as it can be with just 1 GB RAM so you have to be very careful not to overload the poor phone with too much to do. My A5 had a very annoying tendency of “optimizing Android apps” upon every reboot, but that’s certainly a bug and not a feature, because it can make the phone start up time slow to a crawl and last up to even 5 minutes or more.

There is a pretty extensive gesture support available and some things like “double-tap-to-wake” are a must for more or less everybody. Blackview is apparently not neglecting the software updates, because during the testing period one OTA update already made itself available for download.

The MT6580M chipset is hardly a powerhouse and the same applies for the GPU so all the benchmarks and tests just reflect that. Keep in mind that the phone has very low resolution so some of the graphical tests were running in that native resolution thus giving pretty misleading numbers (yes looking at you Epic Citadel). Another hindrance is very slow eMMC memory used, but again and again has to be expected with ultra budget device.

For gaming it obviously suffers from slow GPU and the aforementioned 2-finger multitouch, but once again the low resolution of the display could be also a benefit, because less total pixels mean less pure graphical power needed. Testing Asphalt 8 on Low setting was perfectly playable, but even simple scroller Rayman lagged from time to time, so the A5 really can’t be recommended for anything serious. But it’s surely not aspiring for that anyway.

With the power efficient chipset and non-demanding display i expected some good battery life numbers, but the 2000 mAh battery managed to score just 5h9m in my usual PCMark battery test and the real on-screen time with heavy usage circled around 3.5 hours. That’s really not great, but considering that the phone lacks the performance for any heavy lifting it’s more than likely the actual user will only use it sparingly and easily gets 1.5-2 day endurance out of it. But still the battery life is in my eyes under the average. 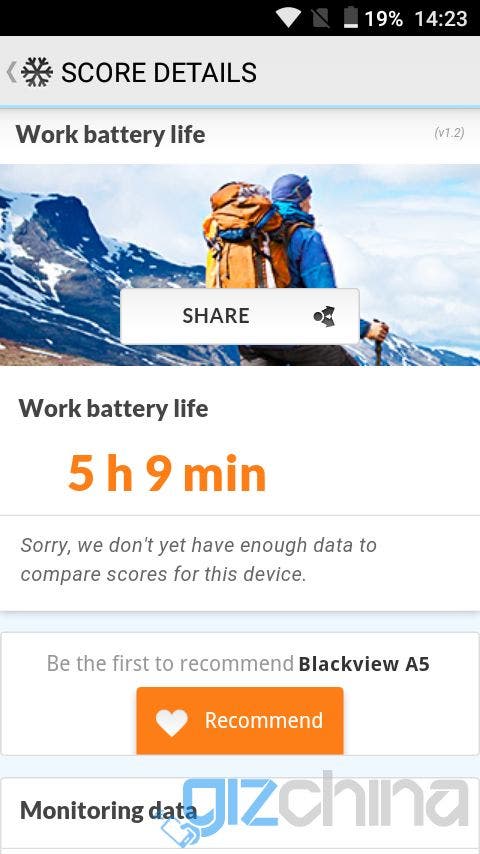 Call quality is pretty decent with the Blackview and the signal sensitivity is quite good. Wi-Fi reception and speed is slightly above average and i have no complaints about that. Same can be said about the GPS, no real issues with the location so even the low-cost Mediatek chipsets are finally usable for navigational purposes it seems.

As an audio device the phone of course fails, the sound is flat without any structure or depth, but that’s perfectly fine for the price range and for most of the people it will suffice anyway.

Cheap phones are usually cutting costs in the camera department and the Blackview A5 is the prime example of that. The camera is extremely sluggish and the pictures are suffering from various cases of all the camera problems across the board, just name it. Overally the shooter has huge issues with focus and even in almost perfect sunlight conditions the pictures are pretty sketchy.

Things turn from problematic to catastrophic in low light conditions and in such cases it’s pointless to even try to capture a decent shot with the phone.

Video capture is limited to HD resolution and is stored in the ancient 3GP format, while the quality is questionable. Judge for yourself in the following short clip.

If you would look at the Blackview A5 with the usual harsh metric and demands, then it can hardly satisfy a geeky customer searching for a perfect phone. But if you take into consideration the crazy $40 price tag, then suddenly the value skyrockets. Yes the camera is terrible, display is low resolution, gaming performance is sketchy and the 4G is non-existent, but on the other hand you get pretty smooth Android 6.0 device, which can handle any basic task and can offer solid and compact build. Did i mention it costs really FOURTY freaking bucks ?

As a secondary/backup or maybe vacation phone it’s just perfect and if you want to give something simple as a first smartphone to your kid or elder parent for mere peanuts of a price, then you can’t go wrong with the Blackview A5. Surely there are better devices for about $60 up, but that’s already 50% increase in the price… You can get the Blackview A5 for the $39.99 price for example from Aliexpress Blackview reseller.