Andy Rubin, the father of one of the most dominant mobile operating systems, Android has been teasing us lately with hints that point towards a top of the line phone which will come as an offering from his venture, “Essential”. After stepping down from Google two years back, he’s back to take on the mobile market.

There have been past leaks and speculations, but this time, the phone has turned up on GFXBench as “Essential FIH-PM1”, and it does not disappoint. Earlier Rubin teased that they are working on a premium “bezel-less” smartphone. This device might turn out to be similar to the Mi Mix. 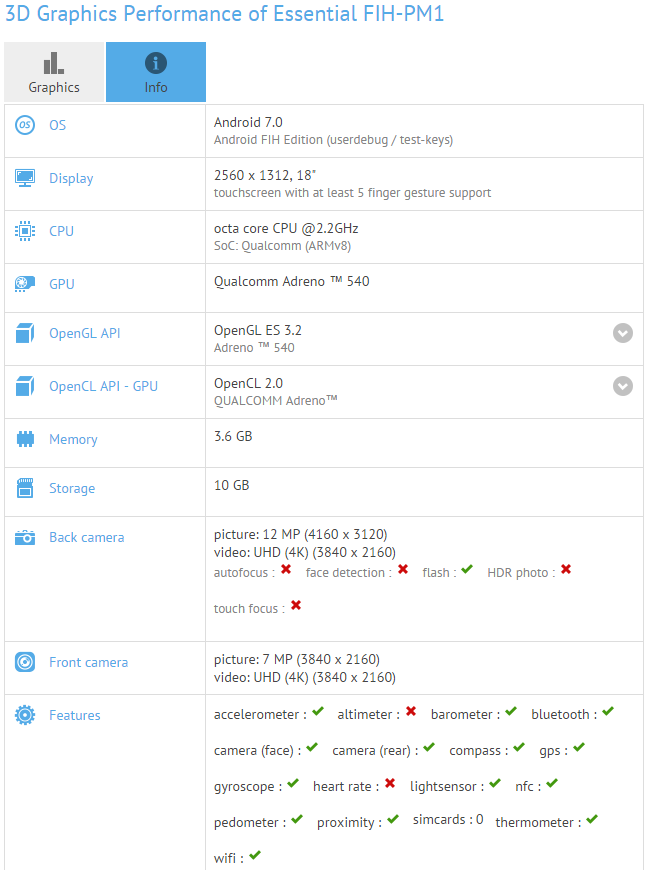 On the spec front, as the listing says, the device will be powered by a a Qualcomm Snapdragon 835, the latest offering from Qualcomm, which fuels every flagship on the planet right now. It’ll be complemented by the Adreno 540 graphics processor. On the memory front, the device will be powered by 4GB of RAM and 16 GB internal storage? Yup, 16 GB seems fairly low, when even mid range phones come with 32 GB of internal storage. But this might just be a test unit and not the final iteration. In the camera department, the Essential will sport a 12 MP rear camera and an 8 MP front camera, with both having the capability to shoot in 4k.

Earlier the leaks said that the Essential will feature a 5.5 inch bezel-less display, whereas the spec sheet says 18 inch, which points to no direction as to how big the display will be (or if this device is even a phone for that matter, considering the lack of a sim card slot as the spec sheet shows). But then again, speculation is all we can do till more info about this phone turns up.

According to sources, the device is said to sport a proprietary connector for charging as well as adding third party modules. Apparently, Rubin’s team is in the process of developing a 360° camera module which can take high definition photos.

What does Andy Rubin have in store for the mobile world? Let us know what you think in the comments below.