It seems that the launch of Xiaomi Mi 6 yesterday gave rise to talks about Xiaomi’s next flagship model – the most awaited Mi Note 3, the next phone of the Chinese manufacturer to pack an OLED display. 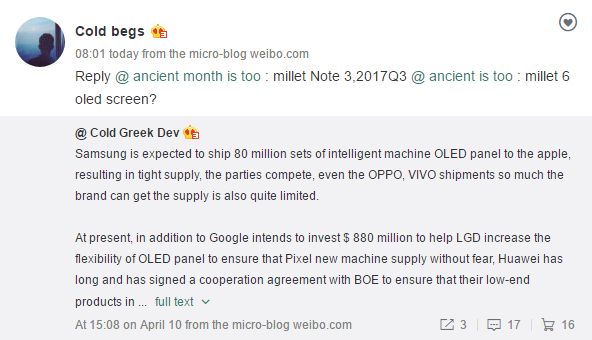 In case you don’t remember, Xiaomi launched the Mi Note 2 back in October 2016 about the same day when Mi MIX was launched! Today some new rumors that appeared in Weibo from a tipster insist that the Mi Note 3 model is scheduled to be launched during Q3 2017, equipped with an OLED display and perhaps make a joint release along with the Xiaomi Mi MIX 2!

Obviously all of the above are just rumors so far, but it would be awesome to have another joint unveiling of two most awaited high end models from the Chinese company. If rumors are correct however, the Mi Note 3 is expected to be equipped with a Snapdragon 835 chip in addition to a curved edge display and other awesome features.