Xiaomi introduced the first Mi 11 flagship earlier than usual to make it reach the market as the world’s first Snapdragon 888-powered smartphone. We knew that the company would eventually add more devices to the family and this is finally about to happen on March 29. After a plethora of leaks and rumors, Xiaomi confirmed that it will unveil the Mi 11 Ultra and Mi 11 Pro at the March 29 “mega launch”. The Mi 11 Ultra and 11 Pro are quite similar in terms of specifications, but the Ultra will take the lead in the camera department. This handset supposedly has the M2102K1C model number and has just passed through Geekbench flexing the muscles of its Snapdragon 888 chipset. 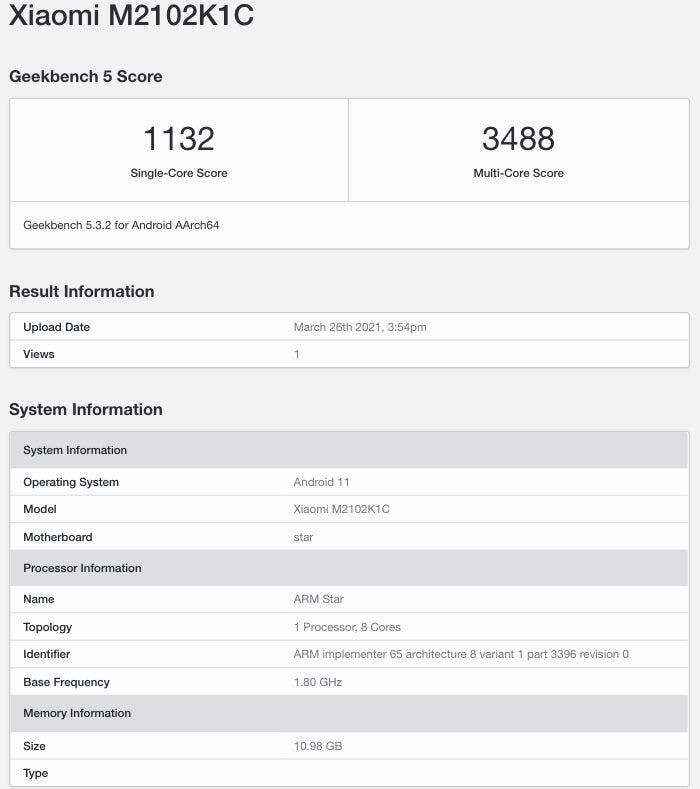 The Mi 11 Ultra passed by GeekBench scoring 1,132 points in the Single-Core tests and 3,488 in the Multi-Core department. These results are pretty much on par with other Snapdragon 888-powered smartphones. This particular variant has 12GB of RAM, but we expect other capacities to be available at launch. The phone runs Android 11 straight out of the box which is hardly a surprise at this point. Of course, we expect MIUI 12.5 to be running on top. The Mi 11 Pro probably has similar hardware. However, the 11 Ultra is set to bring experimental hardware such as Xiaomi’s first chipset.

The Chinese giant announced today that the Mi 11 Ultra will pack a new chip and a silicon-oxygen anode battery. The function of this chip is yet unknown, but the battery technology is the second generation of a tech that debuted on the concept Mi Mix Alpha. This new technology will enable faster charging. Both the Mi 11 Ultra and Mi 11 Pro will have a 5,000mAh battery with 67W fast-charging using the GaN charger. It’s not usual to see a huge battery like this one coming alongside more than 60W of charging. So the battery technology probably is helping Xiaomi to improve things. We are curious to see a comparison between standard Li-Po batteries and the new cutting-edge silicon-oxygen anode cell.

The Ultra will also come as the first smartphone with Samsung’s large GN2 camera sensor. The Pro will pack it as well, but we expect the Ultra to have more advanced features. Both devices will have periscope lenses and a small display on the back. This secondary display can be used as a viewfinder for taking selfies. But that is just our most obvious guess. Hopefully, there will be more scenarios where it will be useful.

As aforementioned, on March 29 the Mi 11 family will grow bigger. The company will introduce a Mi 11 Lite, Ultra, and Pro. Furthermore, it will have chat about the return of the Mi MIX series. We assume it will come in the form of Xiaomi’s highly anticipated foldable phone.