With just one week left until we finally see the Galaxy Note 8 officially it’s no surprise the phone is already on almost every benchmark site during the past few days. The device with Exynos 8895 appeared on Geekbench and GFXBench while the Snapdragon 835 version popped on AnTuTu yesterday. 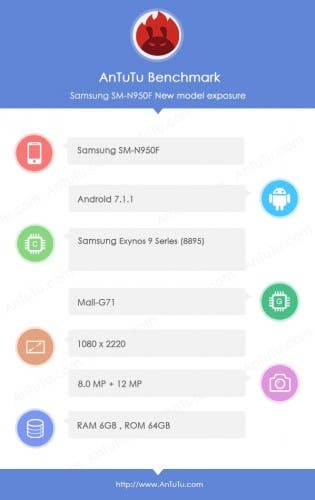 Earlier today the Exynos 8895 variant of the device appeared on AnTuTu with model number SM-N950F, running on Android 7.1 Nougat. The specific variant comes with 6 GB RAM and 64 GB storage, although other versions with different internal storage are still a probability for some markets.

It boasts an Infinity Display with 2220 x 1080 pixels resolution but if you’re a geek, then you can tweak it up a bit in order to reach the maximum 1440 x 2960 pixels from the Samsung menu. Unfortunately the AnTuTu listing does not provide information about the battery capacity, but leaks already suggested it will have a capacity of 3300 mAh.

Previous Xiaomi Carnival Kicks Off at Geekbuying - Up to %50 Off

Next Sharp Aquos S2 sells out in China, will be available again on August 18