Panasonic has just officially announced the introduction of a new mid-range phone to its Eluga series of Android phones. Dubbed Panasonic Eluga I4, the mid-range phone is the successor to the Eluga I3 and has some decent specs line up including a physical home button with fingerprint sensor.

Available in in Blue, Black and Gold color options, the device has a somewhat sleek designs with a single non bumpy rear camera, dedicated dual SIM slots and a microSD card slot.The affordable phone flaunts a 5-inch HD display with 2.5D curved glass screen and is powered by a 1.25 GHz quad-core MediaTek MT6737  processor with 2GB of RAM. The device has 16 GB of internal memory expandable up to 128 GB using a dedicated microSD card slot. The Panasonic eluga I4 runs on Android 7.0 Nougat OS out of the box. 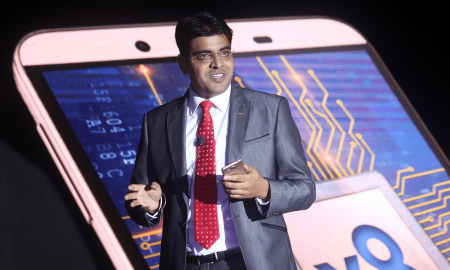 On the rear side, the device is packed with an 8MP sensor with quad-LED flash and 5MP sensor on the flip side. The front facing camera has no flash. A 3000mAh non removable battery is provided to keep the device on.

The Panasonic Eluga I4 is priced at Rs. 8290 and available in India from Panasonic brand shops and other authorized retail outlets.

Next Huawei Mate 10 Pro colors leaks in a fresh Render