Presently, Huawei seems to be a very pretty face in the smartphone industry. Just last month, it launched the bezel-less Huawei Miamang 6 and presently, it has at least three new smartphones to be released which includes Huawei Mate 10, Huawei Mate 10 Pro, and Huawei Honor 7X. Some leaked image renders of Huawei Mate 10 Pro has been making rounds on the internet lately but right now, its Mate 10 sibling is in the news after some of its key specifications surfaced online before launch via a promotional poster. 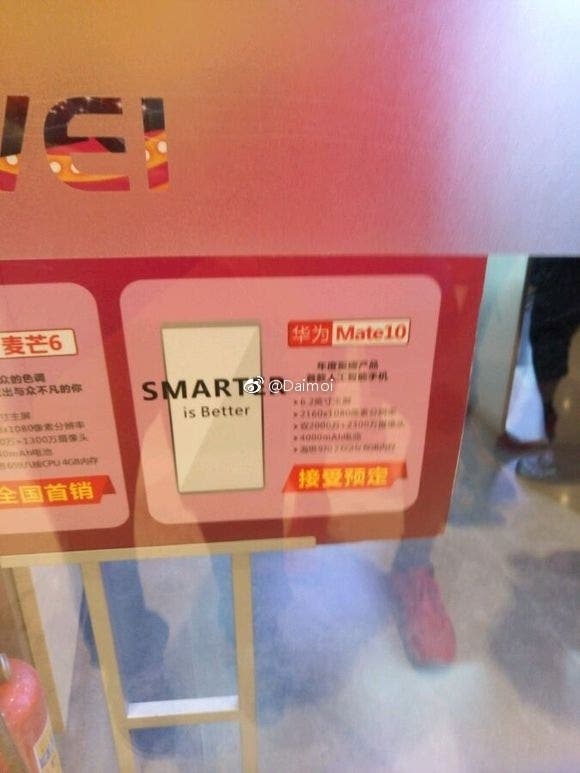 The poster information is not much different from the rumors about this smartphone. It shows that this device will sport a 6.2″ display with 2160 x 1080 pixels screen resolution and it will be powered by Huawei’s own Kirin 970 SoC which has a built-in AI capabilities. This smartphone comes with a dual camera set-up which is made up of a 20-megapixels camera supported by another 23-megapixels camera snapper. This smartphone will sport a huge 4000mAh battery which will last a whole day on a single charge but this is not new as it has been confirmed earlier by Huawei’s official Tweeter handle.

Apart from the shreds of information on the Huawei Mate 10 which was officially released by the Chinese manufacturer, every other leak ahead of its October 16th launch event cannot be taken with much seriousness.

Previous Xiaomi Redmi 5 Plus To Launch This Month?

Next Essential Phone To Get Android Oreo & More In Some Weeks