Earlier today, OPPO officially announced its next flagship device, OPPO R11s in nine Chinese cities where it used electronic billboards to showcase the nine major features in this upcoming flagship. Now, the major specifications of this device have appeared on AnTuTu’s Weibo page. Before now, we already know much of the leaked listings which include its full-screen design (18:9 aspect ratio), 4GB/64GB memory, Snapdragon 660 mid-range processor and the 20MP main sensor coupled with a 20MP selfie camera. However, some more information was made known by this leak. 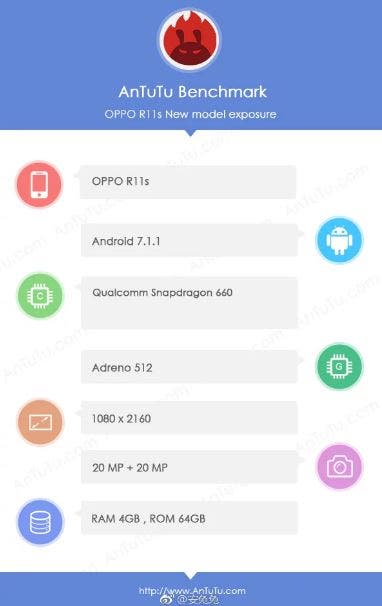 Though we already know that this smartphone will sport a 20MP front and rear camera, the rear camera will be a dual camera setup where the 20MP camera will be supported by another 16MP snapper. In addition to previous information, the current leak suggests that this device will run on Android 7.1.1 Nougat with a touch of OPPO’s Color OS custom UI and an Adreno 512 GPU will also be in the pack.

From the teasers, we have seen that the rear of this smartphone is identical to its predecessor, OPPO R11. As for the front design, all we know for now is that it will have a full-screen. {revious information has it that OPPO R11s will come in four variants which will support 5V 4A fast charging  (VOOC fast charge).

Next Finally, Vivo X20 Plus To Arrive 28th of October