Information from China suggests that HTC is gearing up to unveil another smartphone codenamed “Ocean Harmony” and this is most likely the last device in the U series. Recall that a few days ago, HTC released two smartphones, HTC U11+ and U11 Life. These devices were codenamed Ocean Master and Ocean Lite respectively. 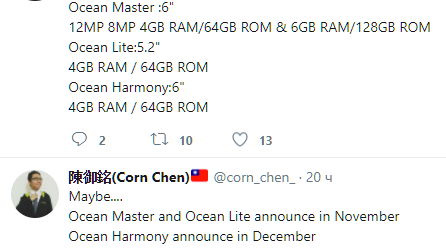 From the specifications of this smartphone, it feels more like a lower version of the U11+ and it should be cheaper than the HTC U11+. Chinese sources also confirmed that this device will be unveiled in December.

As for its specifications, only a handful of information is available for now. “Ocean Harmony” is equipped with a Qualcomm Snapdragon 652 processor coupled with 4GB of RAM and 64GB of internal storage. It uses a 6-inch (could be 5.99) display with a resolution of 2160 × 1080 and a screen aspect ratio of 18:9. The lights of this device are kept on by a large 3930mAh battery and it will be compatible with Edge Sense feature which allows users to launch apps and carry out other operation with a simple squeeze of the smartphone.

Previous OnePlus 5T Will Start at Under $600

Next Blackview A10 New Slim & Light Budget Phone is Coming