While we await the official announcement of 8 full-screen smartphones from Gionee on November 26, some leaks about the Gionee M7 Plus have been surfacing online. Yesterday, this smartphone made an appearance on GXFBench where some details were revealed. Now, some key specifications have been revealed on AnTuTu. From speculations, the M7 Plus will be joined by Gionee S11, F6, F205, GNF5006L, M2018, and Steel 3 in the November 26 announcement. 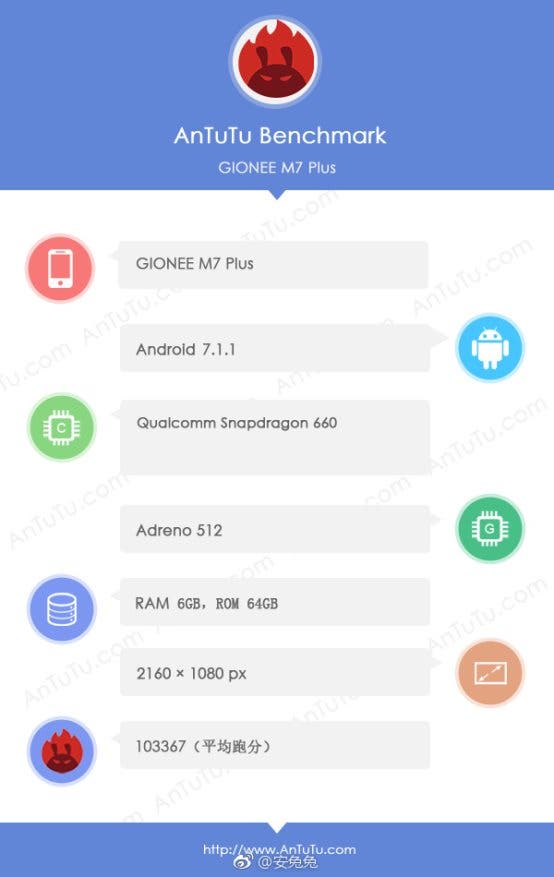 As for the specifications of Gionee M7 Plus, this smartphone will be powered by a Snapdragon 660 chipset coupled with 6GB of RAM and 64GB internal storage. It sports a 6.43-inch display (18:9 aspect ratio) with 2160 x 1080 pixel resolution and its graphic is handled by an Adreno 512 GPU. This smartphone runs on Android 7.1.1 Nougat and has a rear fingerprint scanner with a dual camera setup. The Gionee M7 Plus also sports an 8MP front camera and a 16MP main camera. Furthermore, it is also rumored to support 16W wireless charging.

As of now, the Vivo X20 Plus is the only 6.43-inch full-screen smartphone and hopefully, it will be joined by the M7 Plus soon. The M7 Plus has scored 103,367 points on AnTuTu benchmarks.