Back in September, Xiaomi launched the Mi Note 3 which came with 6GB/64GB and 6GB/128GB configurations. Shortly after launch, the Chinese manufacturing giant discounted the smartphone and the 64GB model became available for about $346, while the higher 128GB version sold for $406. Now, a new variant with a cheaper price tag has been released probably to attract more buyers. This variant comes with 4GB of RAM and 64GB of internal storage. This model will sell for $301 and will be available in blue option from November 23 in China. 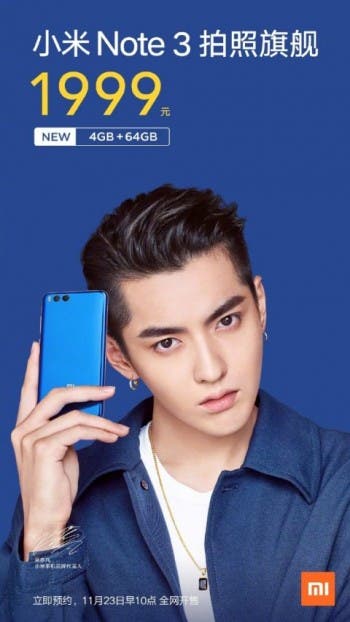 Well, apart from the RAM, nothing else has changed in this smartphone. It still uses a Snapdragon 660 CPU coupled with a 5.5-inch 1080p LCD display. It uses a dual rear camera setup with two 12MP snappers on the rear supported by a 16MP camera in front. The lights of this smartphone are kept on by a 3,500mAh non-removable battery and it also comes with Android 7.1 Nougat out of the box.

Next Meizu Will Abandon Rear Screen With Full Screen Flagship