Yesterday, a Xiaomi Engineer, Zhang Guoquan, announced the progress and arrangement of Xiaomi smartphone system upgrade on Weibo. Mr. Zhang said that two years old Xiaomi Mi 6, Xiaomi Mi MIX 2 and Mi Note 3 will get the Android 9 Pie update soon. In addition, the Xiaomi Mi 6 which was released in 2017 and still stands as one of Xiaomi’s most expensive devices will also get “Game Turbo”, a GPU driver which makes gaming with a smartphone fluid. 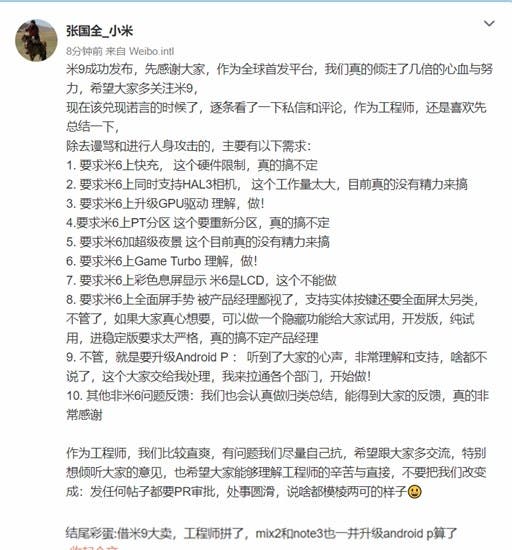 The report did not state when this update will be released or if all three devices will get this update simultaneously but we know that the Android 9 Pie is coming to these three smartphones. Xiaomi is actually trying to breach the gap between it and the top smartphone manufacturers in the industry. Yesterday, it released its latest flagship smartphone, Xiaomi Mi 9 which sells for only 2999 Yuan ($446). It also introduced a cheaper variant of the Mi 9, Xiaomi Mi 9SE which is the first smartphone to come with the Snapdragon 712 SoC. With the release of cost-effective smartphones as well as regular software updates for its devices, the company is slowly winning the hearts of other markets in the world.

It has established its place as the No. 1 smartphone brand in India and recently, it claimed a good chunk of the Eastern European market by ranking first in Ukraine and other smaller markets in other parts of Europe.

Next Huawei India CEO: The Indian government is very supportive of Huawei