Barely 24hrs after it officially announced the release of a bold new colorway for the Galaxy S8: Burgundy Red, Samsung electronics is now reportedly set to release yet another variant of the already special Rose Pink Galaxy S8+ called SMARTgirl Limited Edition.

According to reports, the Smartgirl limited edition Galaxy S8+ will be available in retail shops across Spain on December 1, starting at €949. The device as you know is a limited edition variant of the galaxy S8+ that will be limited in supply, and may likely not make it out of Spain. Reports have it that only about 7000 units will be made available.

The SMARTgirl Samsung Galaxy S8+ much like the Pink color variant features a pink metallic finish but now comes with a shiny Swarovski case designed to appeal especially to the female folks.

Other than that, the Galaxy S8+ SMARTgirl Limited Edition comes with same specs as the Galaxy S8+. It features a 6.2-inch WQHD+ Infinity display and is equipped with equipped with an Exynos 8895 chip at 2.35GHz  coupled with 4GB of RAM and 64GB of expandable onboard storage. The device is equipped with 12MP Dual Pixel sensor from the S7 but with improved software – it enables it to capture multiple exposures to raise image quality. According to Samsung, it’s called Multiframe Processing and it sounds a lot like Google’s HDR+. There’s also an 8MP sensor in front with autofocus (and clever face detection). 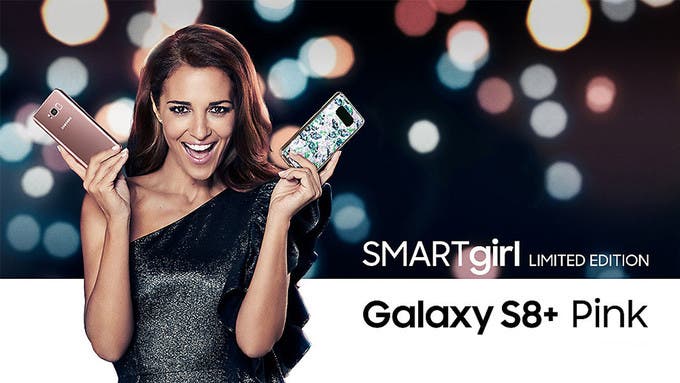