HTC was last seen in the news a couple of weeks back when it announced the HTC U11+ and HTC U life smartphones. Latest information pulled out from the database of a Geekbench 3 benchmark test reveals that HTC is on the verge of releasing a new smartphone. The test result shows a device with the model number HTC X2-HT that could be on its way to the upper mid-range segment.

The Geekbench listing reveals a single core score of 876 and the multi-core result is 4189. The phone is tipped to arrive with Android Oreo out of the box. The listing further revealed that the device will be powered by Qualcomm’s latest octa-core SoC, the SD 660 with a clock speed of 2.21GHz. The device will come with 4GB RAM.

Having passed the Geekbench test, the device should now be preparing to get the usual approval from TENAA. We should be able to know more of the key specs and designs of the device when it gets TENAA’s nodding. 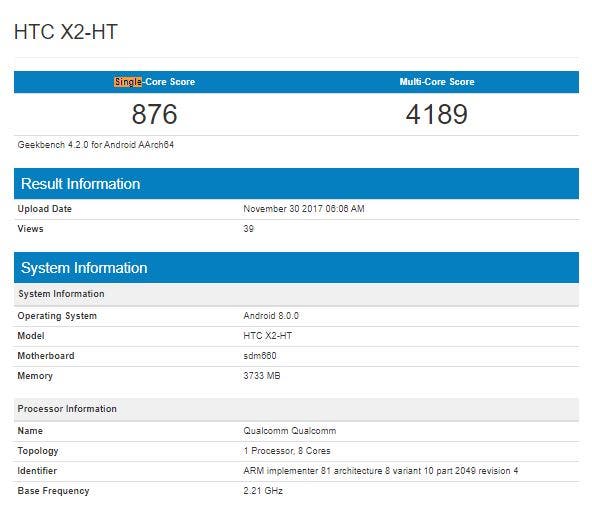 According to rumors flying around, the HTC X2-HT might turn out to be the generation of HTC U Play which was announced about a year ago or a new revision of the U11 Life.There are also those that speculate that the device might be the HTC Ocean Harmony which was earlier rumored to arrive later in December.  Our guess is that the device could be part of HTC line up for early 2018 release.