A couple of months back,  President and CEO of Sharp Jeng-Wu Tai confirmed that his company’s first Europe bond smartphones would appear at the Mobile World Congress 2018 in Barcelona. While the company hasn’t given any hint on what to possibly expect at the MWC 201, a new Sharp branded smartphone dubbed Sharp FS8018 has been spotted on benchmarking site, Geekbench. The limited specs sheet available reveals the device could be a budget phone that could drop later in 2018.

Most notably, the Benchmark listing reveals the device will come with the mid-range Qualcomm Snapdragon 630 (SDM630) with octa-core SoC with up to 2.2 GHz, paired with 6GB of RAM. The device is listed as running Android Nougat, which is quite questionable, considering that the device could be slated for 2018 release. However, It’s likely the company may finally implement the latest version of Android before release, still may release the device with Nougat and thereafter push out Oreo as an update, so whichever way it plays out, we’ll have our thoughts for now.

Benchmark results show the device amassing 961 and 5215 points in the single and multi-core test respectively. 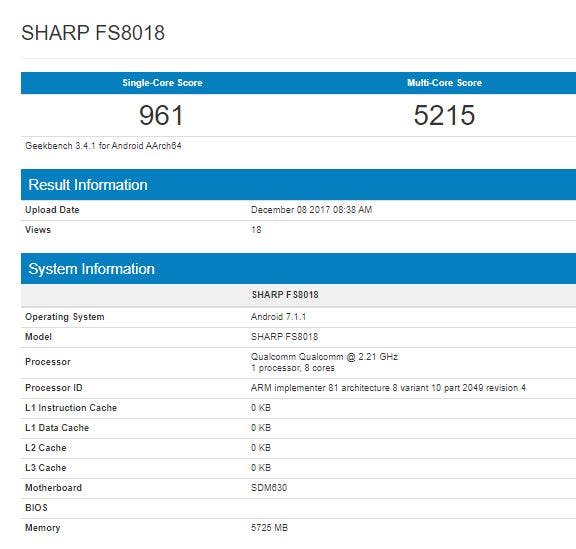 That is about all we know about the Sharp FS8018 for now. We should get to know more about the device in the days to come.