The current spec sheet that has leaked gives us an overview of the design and specs of the Oppo A83. The phone had appeared on TENAA at the start of this month with a full screen display.

The phone has the typical candy bar design albeit the fingerprint scanner and dual camera setup, which is now fast becoming the go-to formula when it comes to making smartphones. It does feature a full screen display which is 5.7 inch in size and has a resolution of 1440 x 720 pixels, as can be seen on the spec sheet. The from is flush with the display and features no physical or capacitive navigation buttons .The MediaTek Helio P23 will be lying under the hood coupled with 2GB of RAM and 16GB of ROM, expandable via the microSD card slot. Measuring 150.5 x 73.1 x 7.7 mm, it will be powered by a 3180mAh battery. 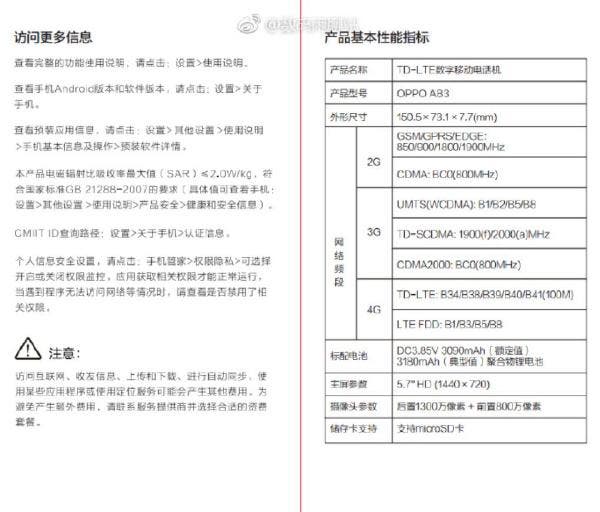 The lack of a fingerprint scanner and the reported specs hint toward a mid range phone. And we wouldn’t be surprised if it does not feature facial recognition either. The phone is Oppo A83 is expected to be unveiled on the 30th of this month at a price tag of 1199 Yuan in Black and Gold colour variants.