UPDATE:  Pardon us guys,  the Samsung SM-A530X happens to be the pre-release version of the recently announced Galaxy A8 (2018) which was earlier rumored to be the A5.

Now that Samsung has closed the rumor doors behind the Galaxy A8 (2018) and A8+ (2018), the next probable device we expect from the company is the flagship Galaxy S9 and all its variants. And while we eagerly await that to arrive, an upcoming Samsung phone rumored to be the Galaxy A5 (2018) which by indication may launch soonest has been spotted on GFXBench database, and as it is typical of the Benchmark site reveals some few basic specs of the upcoming device.

The device referred to as Samsung SM-A530X on the benchmarking website is seen running Android 7.1.1 and is powered by a 2.1GHz octa-core processor (probably Exynos 7885 SoC) with ARM Mali-G71 GPU  mated to 4GB of RAM and 32GB of expandable internal storage. The device will come with a 5.6-inch multi-touch display with 2220 x 1080 pixels Full HD+ resolution, while it will be fitted with a 16-megapixel camera above the display for selfies and with a similar 16MP rear shooter with LED Flash, Auto Focus, Touch Focus, Face Detection and 1080p video recording support.

Furthermore, the benchmark site reveals that there are a couple of sensors including Accelerometer, Barometer, Compass, Gyroscope, Light, Proximity sensors, as well as a host of connectivity options like Wi-Fi 802.11ac, Hotspot, Dual Band, Bluetooth V4.2, USB Type-C, GPS, and NFC. 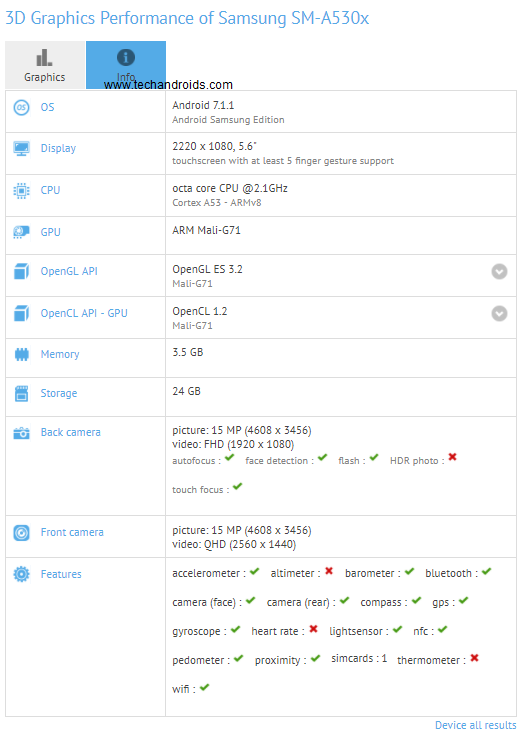 There are no official words yet on when the SM-A530X will be unveiled, but we look up to an early 2018 launch.