If the latest reports flying around are to be taken seriously, HMD Global is expected to hold an event scheduled for January 19 where it is expected to unveil some lineup of products, presumably the Nokia 9 will be the star of the event. And while we already know some few basic specs of the Nokia 9 courtesy of FCC listing, the device has now popped up on Geekbench database affirming some of its specifications.

The Nokia 9 as it appeared on Geekbench is codenamed avatar, same code name outed by FCC a few hours ago. The device will boot Android Oreo out of the box, which is not really of a surprise considering that most upcoming flagships such as Xiaomi Mi 7 and the LG G7 will be based on the latest OS.  What is quite disheartening is the revelation that the Nokia 9 will be powered by Snapdragon 835 SoC running at a clock speed of 1.90GHz coupled with 6 GB RAM.

On the performance side of it, the Nokia 9 pulled a total scored 1910 in the Geekbench single-core test, while it pulled 6796 in the multi-core test. Both of those scores are short of the numbers recorded for the SD 845  powered Samsung Galaxy S9 a few hours back. The Galaxy S9 scored 2121 and 8351 in the single-core and multi-core tests, respectively. 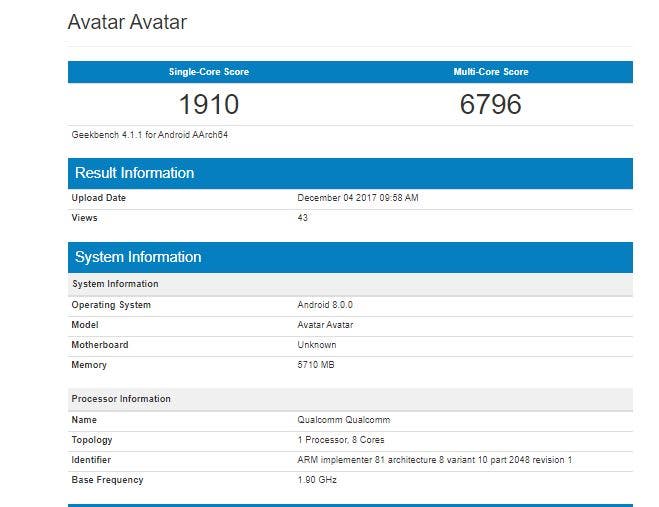 The device according to reports will be unveiled alongside some other Nokia devices on January 19. We are still weeks far from the launch, so we should get to see more leaks, video and hands-on images.