There have been speculations that Sony will unveil the Xperia XZ1 successor at the MWC in February. This smartphone is expected to sport the bezel-less display just like most recent flagship smartphones. However, a leaked spec sheet has revealed more for the Sony H82xx device. This smartphone is expected to arrive in four versions which are probably designed to meet the needs of different markets. The models are H8216, H8266, H8276, and H8296. Geekbench database has now picked one of these models – H8266 and the listing shows that the device comes with the flagship Snapdragon 845 premier SoC coupled with 4GB of RAM and runs Android 8.0 Oreo.  This chipset will be the core of most flagship devices next year just like its sibling Snapdragon 835 did this year. Expected flagship devices like Xiaomi Mi 7 and Samsung Galaxy S9 are already scheduled to sport this SoC. 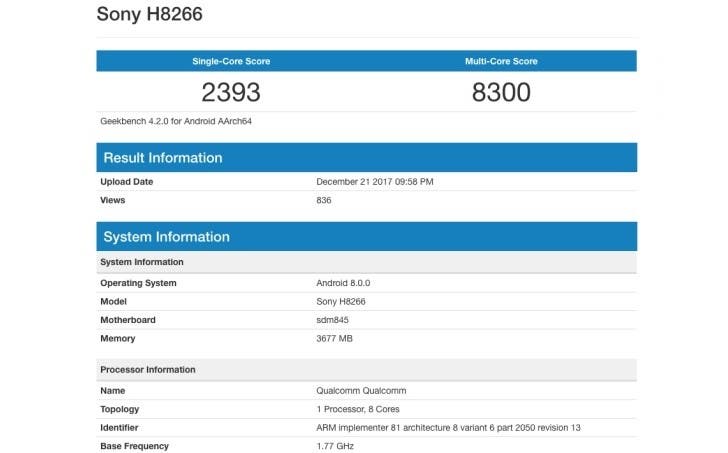 The Geekbench scores for this smartphone are quite impressive as it got a 2393 single-core score and 8300 for multi-core. From this, it appears that Snapdragon 845 is truly a highly performing chip as the  Galaxy S9+ also racked up a similar score on Geekbench. From previous leaks, this smartphone will come with 64GB internal storage, two 12 MP cameras on the rear, and a 15 MP front-facing snapper. It lights would be kept on by an average 3,130 mAh battery.