There have been too many changes in the smartphone market during past years. Especially, this means to the camera features, full-screen mainstream, and others. But there is a feature remaining unchanged. As you guess, Qualcomm continues leading the market. Today, AnTuTu announced the top ten mobile chips of 2017 based on a survey. 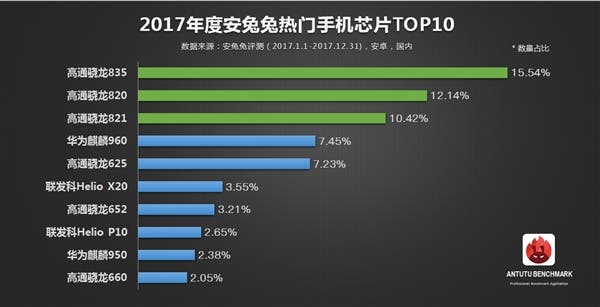 As you can see, Qualcomm models are the most popular chips in the smartphone market. They occupy about 50.59% in total of the whole market. Thus Qualcomm’s Snapdragon mobile chips not only lead the list but also take the largest market share.

As for the leader, the Snapdragon 835 chip is found on many high-end smartphones including the Samsung Galaxy S8, Xiaomi Mi 6, Sony Xperia XZ Premium, Nokia 8/9, OnePlus 5/5T, Xiaomi Mi MIX 2, Nubia Z17/Z17s, HTC U11/U11+, and so on. Thus this SoC is available on all top-notch models that are sold in many markets and have won customers’ hearts long ago.

Moreover, this processor has become so popular and shown amazing performance that a Microsoft decided to collaborate with Qualcomm. The first laptops sporting a Snapdragon 835 are already leaked in face of the HP Envy x2. But as reported, Samsung and Xiaomi will design their own models as well.