The Galaxy S9 and Galaxy S9+ are two hot devices expect to grace the smartphones market this year. Samsung has already confirmed at the CES 2018 that it will drop both devices at the MWC set to begin in February. Well, while we eagerly await that day, a  US- bond variants of both devices have just cleared FCC certification.

Now, this is a possible indication that the Galaxy S9 and Galaxy S9+ have both passed all the tough hurdles set by FCC in the US. an implication that the devices are both ready for consumer use.

The Galaxy S9 and Galaxy S9+ that just made it through the FCC in line with last year’s S8 and S8+ US, variants will carry the model numbers M-G960U and SM-G965U for the Galaxy S9+. As per FCC fillings, both devices will support CDMA, GSM, UMTS, LTE networks, and by implication, a single variant of each devices will be released, so supported carriers can customize with their own branding if they so desire.

While the FCC database has not revealed the specifications nor real-time images of both devices,  previous leaks have it that both devices will come with a design similar to that of the Galaxy S8, while it will have considerably huge upgrades in the internal makeup.

There have been speculations that Samsung has reserved the first batch of the newly unveiled Snapdragon 845 processor for the Galaxy S9  duo, while the new Exynos 9810 SoC will be used in other markets. It is rumored to have a 6GB of RAM and 128GB of internal storage, while it will carry on the bezel-free trend with its 5.8″ S-AMOLED display panels with 18.5:9 aspect ratio. The Galaxy S9 duo will obviously boot Android 8.0 Oreo coupled with Samsung Experience 8.0 UI.outof the box. 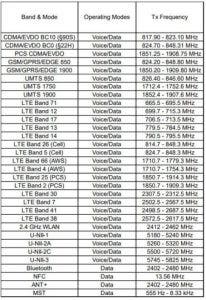 We will update you with more details as they pop up.

Previous Xiaomi's Partner, Huami, Files For A $150 Million US IPO