Xiaomi’s Redmi 5 and Redmi 5 Plus have been launched in China in early December 2017. It’s been more than a month now and there’s been no info on its rollout outside the country. That changes today with Xiaomi’s official Facebook page posting a January 25th launch date of the handsets in Taiwan. The official statement is quite clear about the launch products. Both the Redmi 5 and Redmi 5 Plus will be launched at the same event. Recent reports about the handset pointed to a February release date. But now, that it’s confirmed, we can look forward to the launch. This also means that the Indian release can’t be far as it is one of the biggest markets of Xioami outside of China. 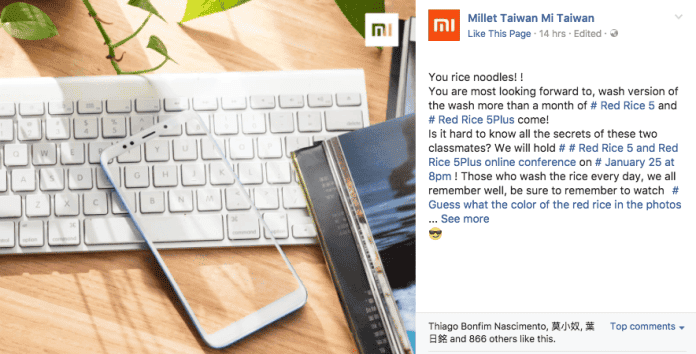 As for the specs of the two devices, we’ll quickly recap them for you. Xiaomi’s Redmi 5 is the smaller model with a 5.7-inch HD+ display panel and a Qualcomm Snapdragon 450 chipset. The handset flaunts a 12 MP rear camera and a 5 MP sits at the front. It will be available in 2GB + 16 GB/3 GB + 32 GB variants.

The bigger brother of the Redmi 5 comes with relatively beefier specs. It boasts of a 5.99-inch Full HD+ panel powered by a familiar Snapdragon 625 SoC. It also has a bigger 4,000 mAh battery to keep the display lit up. Further, the Redmi 5 Plus comes in 3 GB + 32 GB / 4 GB + 64 GB options. To know in-depth specs, you can visit this link.