The Nokia 7 was introduced in back in October 2017, while the device is yet to make it to other markets out of China, it appears the Nokia 7 will soon be getting a sibling. The sibling which will be called the Nokia 7 plus was first sighted earlier this year alongside the Nokia 4 when they appeared in an APK file for the Nokia camera app, now in line with earlier rumors, HMD may just unleash the device any moment as it has now popped up on the Geekbench site.

The Geekbench site didn’t give much away but clearly indicated that the device will come with the Nokia 7 plus moniker. The upcoming device will boot Android 8.0 Oreo Oreo out of the box, while it will be powered by the Snapdragon 660 processor, an upgrade over the Snapdragon 630 used by the Nokia 7. The RAM size, however, remains at 4GB while the rest of the specs remains unknown. 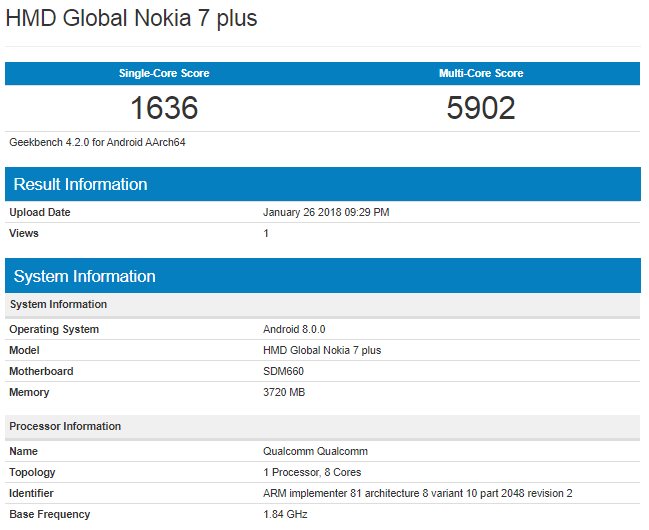 We already know that HMD Global will be having a promising event at the Mobile World Congress where the company is expected to launch the Nokia 9. There are a couple of other Nokia phones rumored for early 2018 release, but what remains unknown is whether HMD will unveil all rumored Nokia phones including the Nokia 7 plus, Nokia 4, Nokia 1, Nokia 3310 4Gand others at the single MWC event or will be spread throughout 2018.