The tablets market is not performing well. This is not a secret anymore. But it’s alive yet. Though the manufacturers come in with new models rarely, they still design new tablets. Probably, no one will mind if we say the best offer in the niche comes from Samsung. Its Galaxy Tab S3 is one of the best models. But it was launched back at MWC 2017. So there should be a new tablet with impressive features and something new to animate the niche. Seems it will come from Acer. It was spotted on a photo at the annual BETT show in London, UK. 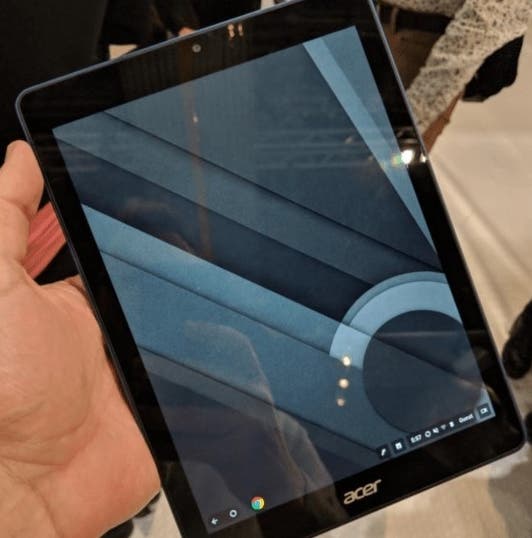 Today a mysterious device leaked on a photo showing a new tablet with an Acer logo on the bottom. But what’s more interesting, the Acer tablet is assumed to run on Chrome OS. So if this leak has anything common with reality, the world’s first tablet running on Google’s Chrome OS will come our way from Acer.

The spotted photo also lets us think the tablet will be packed with an 8- or 9-inch screen. A Chrome browser icon is placed on the left bottom corner next to the Home and Back buttons. The rest of system icons including a battery, sound, WiFi, time, and Gallery apps are located on the opposite side. The tablet apparently also a companion stylus produced by Staedtler.

We have heard there will be a Chrome OS-powered tablet for a while. But no certain information has been known but the codename of ‘Scarlet’. As for now, nothing can be said for sure, but at least, we can say the first of them will appear in 2018. So there are to events that can host this device. It will be either MWC 2018 or Google I/O 2018 in early May.

Next Download: Use Pixel 2 launcher on any Android phone (No root needed)