It’s February, fellas! And you know what that means? It’s time for Google’s awesome Android distribution numbers. You probably know that Android Oreo appeared like a tiny strand of hair on the chart at the end of 2017. Well, now its time to celebrate as Android Oreo now commands a whopping 1.1 % of share on the distribution chart. 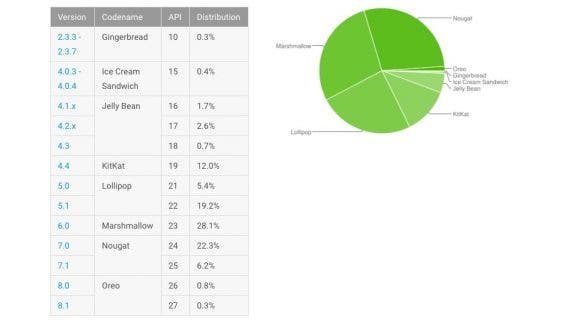 The number includes the recently rolled out Android Oreo 8.1, so that’s even cooler. However, considering that the Galaxy S8/S8 Plus are soon to receive the stable version of Oreo, we should see a bump in this number soon. Moreover, a number of other flagship devices are set to get 8.0 in February. So it’only going to rise from here.

Going down to Android Nougat, the share rose to 28.5% from 26.3%. That is a rise of 2% back from December. Together with Oreo, we see these two continue the upward trend as more devices with Android Nougat hit the market/get updated.

Android Marshmallow will probably see its share deflate slowly from now. As it stands, Marshmallow makes up 28.1%, down from 28.6%. Lollipop also continues its downward tumble with a share of 24.6% versus 25.1% in December 2017.

Going even lower, KitKat OS has 12% share, Jellybean has 5%. And in case you want to know, Gingerbread and Ice cream sandwich are at 0.4% and 0.3% respectively. The data is collected before the 7-day period that ends on February 8th, 2018.

Next Remember the Turing Phone? The manufacturer just filed in for bankruptcy