Ahead of its February 25th unveiling date, Samsung’s upcoming flagship duo, the Galaxy S9 and Galaxy S9+ have both appeared in multiple leaks and renders, with the latest press renders which surfaced a couple of hours back revealing every minor detail about the design. The duo like you know would be revealed in two options based on the SoC; there would be the SD 845 powered Galaxy S9 duo, as well as the Exynos, powered Galaxy s9 and S9+.

The Galaxy S9 based on the Exynos SoC already impressed us with a single-core score of 3,648 and a multi-core score of 8,894, but the plus-sized variant which just made a last minute visit to the Geekbench has recorded the best scores ever on any Android phones.

The device as you can see below pulled a total of 3,773 and 9,024 on the single-core and multi-core tests respectively. The scores posted for the Galaxy S9+ for the sake of comparison is in the same region as those posted for the iPhone 8 duo and the iPhone X all of which averages around 4,200 single-core and 10,100 multi-core, it, however, triumphs both the SoC variants of the Galaxy S8 duos and the SD 845 powered Galaxy S9+, so it is safe to assume that the Exynos powered Galaxy S9+ will come with unprecedented improvement is real-life performance. 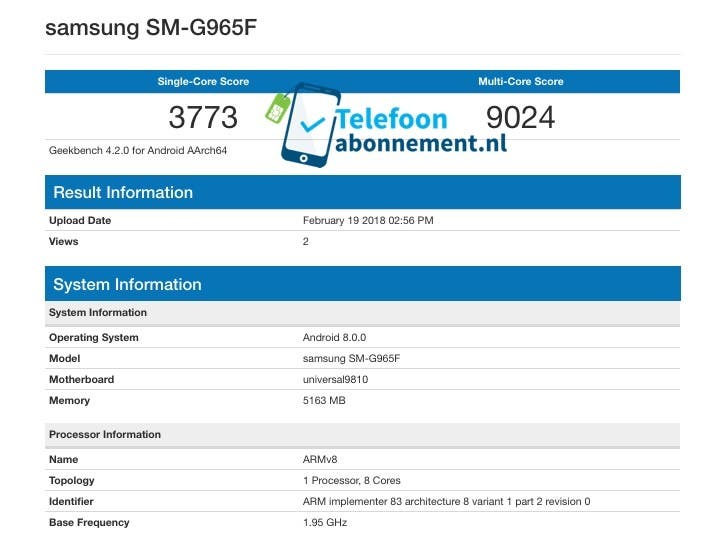 Other details revealed by the Geekbench include the SM-G965F model number, 6GB of RAM as well as Android 8.0 Oreo.

Next Asus Pegasus 3S With Great Connectivity Options at $159.99 [Coupon]