Earlier it was reported that HTC is working on expanding its desire line of smartphones. Evan Blass, a popular tipster in one of his tweet revealed that the entry-level HTC model codenamed as the breeze will be launched as the HTC Desire 12. And just a few hours after such revelation was made, a retail box allegedly that of the HTC Desire 12 has pooped up revealing a few specs of the upcoming device.

To detail you on the HTC Desire 12 specs, the device as per the leaked retail box sports a 5.5-inch, 18:9 aspect ratio display with a 720 x 1,440 (HD+) resolution, which without a doubt could be its major selling points. The phone is said to pack a 64-bit, quad-core MediaTek chipset with 3 GB of RAM and 32 GB of storage under its hood, while a 12 MP rear-facing camera with 1080p video ability and 5 MP front-facing camera are provided for photographic functions.The whole unit will be lighted by a 2,730 mAh battery with a full set of connectivity options including 4G LTE, Bluetooth,  nano-SIMs and a microSD card. 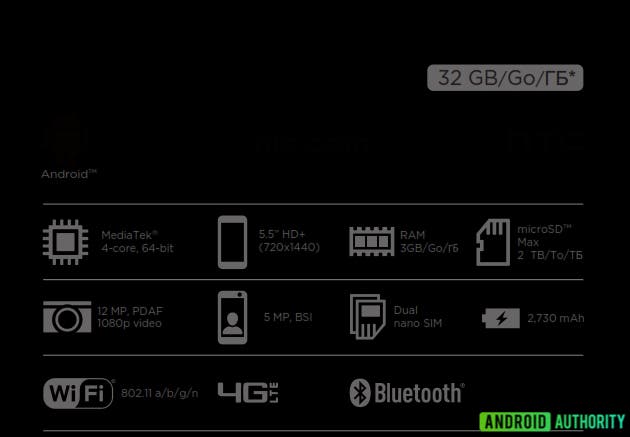 We are yet to be treated with images an renders of the upcoming HTC Desire 12, but we expect such details including the Desire 12 pricing to surface in the days leading to the MWC 2018 in Barcelona. Till then, keep a tab on our MWC 2018 coverage here.