The global wearables market shows astonishing results. The overall shipments increased by 10.3% in comparison to the last year’s result. In 2017, all brands jointly shipped over 115.4mln units, while this indicator was 104.6mln for 2016. Though the main players remain the same, their positions have changed. According to the data provided by IDC, Apple leads the list again.

As you remember, in 2016, the Chinese Xiaomi could outrun most of its competitors and landed in the second place with 15.7mln shipped units and 15% of market share. Thanks to the first-gen Mi Band and its successor, the Xiaomi Mi Band 2, it could show the best results. As for 2017, this manufacturer could sell the same amount of wearables, but the Cupertino-based manufacturer performed better. That’s why Xiaomi’s market share decreased to 13.6%. However, year-over-year change is only -0.3%. 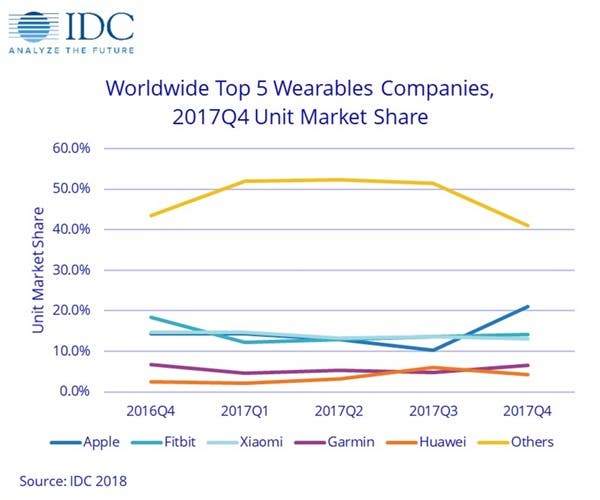 The worst results are shown by Fitbit that has a -31.6% year-over-year change. Because of this, it is only the third with 15.4mln shipped units. Its market share is 13.3%. To realize what a decline it has had, let’s take a quick look at the results for 2016. Fitbit sold 22.5mln wearables and reached a market share of 21.5%.

The results of other top brands yield these three manufacturers a lot.

As we can see, Xiaomi, which actually comes with perfect models has begun yielding its positions. It’s mainly related to the fact the third-gen Xiaomi Mi Band 3 is late. So if the company wants to get back its market share, it should accelerate the launch of this product.

Previous Smartisan And 360 Mobiles Are Rumored To Merge