In 2017, two Chinese manufacturer in face of Smartisan and 360 Mobiles came in with a few new models showing off their ambitions in various niches. But today some curious news leaked on the net. According to them, these two companies will be merged soon. It’s said Zhou Hongyi, 360 chairman, and Luo Yonghao, Smartisan CEO have talked about this before the Spring Festival 2018. 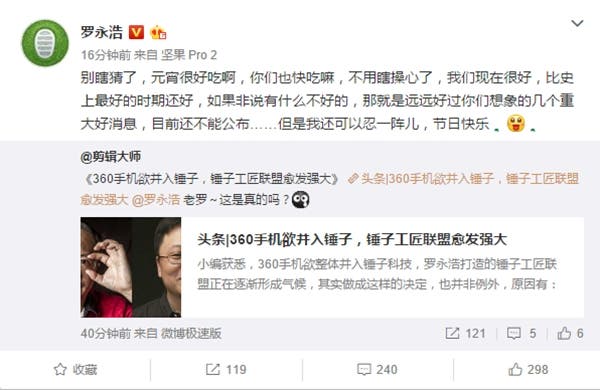 In response to these rumors, Luo Yonghao said not to come in with a blind guess. He added there is no reason to worry about. As the CEO claimed, Smartisan has shown the best results in 2017 in its history. Moreover, there is a few good news that will be announced in the nearest future.

Earlier, the company has announced it will hold a new conference on May 15 to release a revolutionary product that will change the market for the next 8 – 10 years. We think it’s the Smartisan T3 that has already passed FCC.

As you can see, the company CEO didn’t say anything new. Moreover, he didn’t confirm or refuse the merging news. So it’s quite reasonable to see a new company based on these two brands. On the other hand, it’s strange if 360 Mobiles and Smartisan merge because both companies are performing well nowadays.

Smartisan has launched a couple of great phones in face of the Smartisan Nut Pro and its successor that are considered to be among the best business-style devices. As for 360 Mobiles, it has launched a few new smartphones, some of which even sport a full-screen design. Plus, it’s making its first steps in the robot vacuum cleaners market. So even if this news is true, we should wait for a strong explanation why they are merging.