Relatively young manufacturing company, Xiaomi, took the bull by its horns when it unveiled the world’s first full-screen smartphone, Xiaomi Mi MIX 2 even when it was not ready to go into mass production. This smartphone came with a lot of innovations and since news first broke of the next-gen MIX 2S, potential users have been optimistic about its features. Amongst other features, it is expected to bring the Full Screen 3.0 technology to the market. While everyone expected Xiaomi to unveil this smartphone at MWC 2018, the company didn’t but rather announced the launch date. It picked March 27th which is also scheduled for the arrival of Huawei P20. 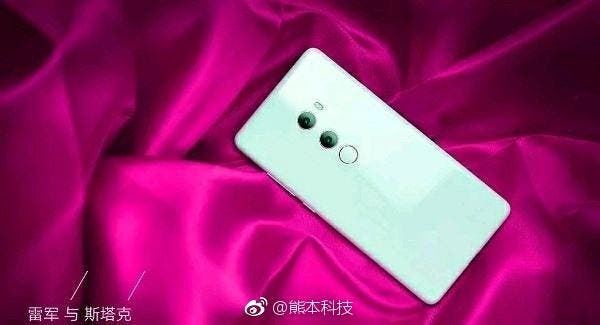 From previous rumors, most of the specs (SD845, full-screen etc) of this device has already been speculated. However, a new set of “official promotional” images just surfaced online. Though these images do not look too official, let’s take a look at what they speculate. From these images, Xiaomi’s new flagship will come with a full-screen design with 100% screen-to-body ratio. Although we have seen images which suggest an on-screen fingerprint sensor for this smartphone, the current leak places this feature on the rear.

In the camera department, there is no indication of the location of the selfie snapper though rumors have it that it would be placed in the top right corner. The rear dual cameras are vertically arranged and an LED flash lies astride them towards the right. On the right side of this image, there is nothing spectacular as we have the conventional volume control knob and the power button. Finally, its design shows a square geometry though the edges are a bit rounded and the Mi MIX is squarer than this smartphone. It uses a white unibody housing assumed to be made of ceramic.