The first-gen Xiaomi Mi MIX was a revolutionary device. It breaks all stereotypes and showcases how a true flagship should look – charismatic, innovative, powerful, etc. that was the first model to launch with a full-screen design. Moreover, unlike many other smartphones available on the market currently, it came with a tri-bezel-less design. This simply means all the edges are narrowed to the minimum, and there is left only a chin that carries a couple of sensors. Thanks to such an appearance it could win the world immediately after its launch. But it caused another ‘movement’. All the second-tier Chinese smartphone vendors began copying this design. On one hand, Xiaomi got tons of rivals. But on the other hand, customers won the most as they were able to get their hands on a cheaper alternative to the Mi MIX. Today we are going to take a look at one of them, which is considered to be the best Xiaomi Mi MIX replica in terms of appearance. The Vkworld MIX Plus grabbed our attention as it is discounted by 29%. So you can acquire this amazing handset for $109.99 only. 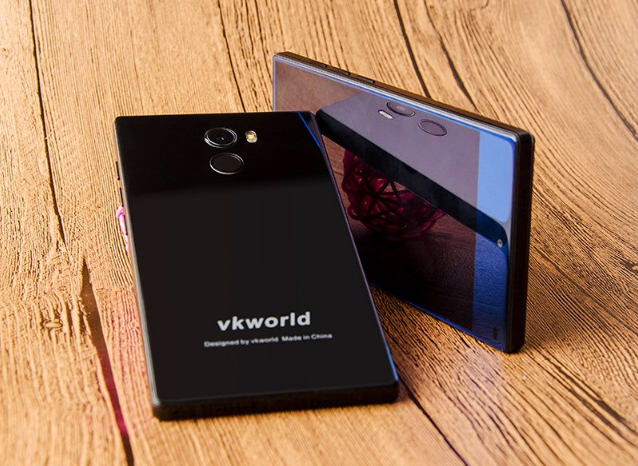 The truth is the Vkworld MIX Plus looks like the Xiaomi Mi MIX but it sports quite different hardware. Externally it is identical to its founding father – the same tri-bezel-less screen, similar wallpaper, a single camera on the back accompanied with a fingerprint scanner, a housing made of glass, and many more. Thus the manufacturer has done its best to come in with a smartphone that looks like the Mi MIX the most. It succeeded. The only difference is the home button placed below the display. But it should be considered as a good decision because the original Mi MIX as well as the Vkworld MIX Plus can’t boast of good ergonomics. So people with small hands will need an ‘assistant’ like that home button. Anyways, the Vkworld MIX Plus is great when it comes to appearance. But what about the internals. Though its hardware doesn’t allow the phone to be compared with the original Mi MIX, there are many key features we should pay attention to. First, it sports a 5.5-inch 720P screen that occupies over 90% of the front panel. It uses an on-cell display technology that significantly shortens the response time and improves the touch accuracy. It is covered by Corning Gorilla Glass that protects the screen from minor scratches.

Under the hood, we have a MediaTek MTK6737 quad-core chip paired with a 3GB of RAM and 32GB of internal storage. Thus it’s sufficient for most of the daily tasks, but do not think you can play heavy 3D games on it. Plus, there is a 5MP front camera, 8MP rear camera, 2850mAh battery, and it runs on Android 7.0.

Previous AllCall MIX2 to Come with a Secondary E-Ink Display