A few days ago, we discovered that a new Xiaomi device dubbed Xiaomi Berlin has been tested on the Geekbench platform, a move that made many speculate that the device might launch alongside the Mi Mix 2. Hot on the heel s of that, a new Xiaomi phone codenamed Xiaomi ‘Dipper’ has surfaced on the Geekbench benchmark with very little info to take home.

The Xiaom Dipper is seen listed on the Geekbench with the flagship Qualcomm 845 SoC coupled with 3GB RAM and should run Android 8.0Oreo out of the box.

The Xiaomi Dipper given the presence of the SD 845 is expected to launch as a high-end device, and that is reflected in its single-core score of 2449 and a Multi-Core Score of 8309 which is quite on par with the Snapdragon 845 version of the Galaxy S9+, which managed to garner a 2,422 single-core score and 8,351 multi-core scor. 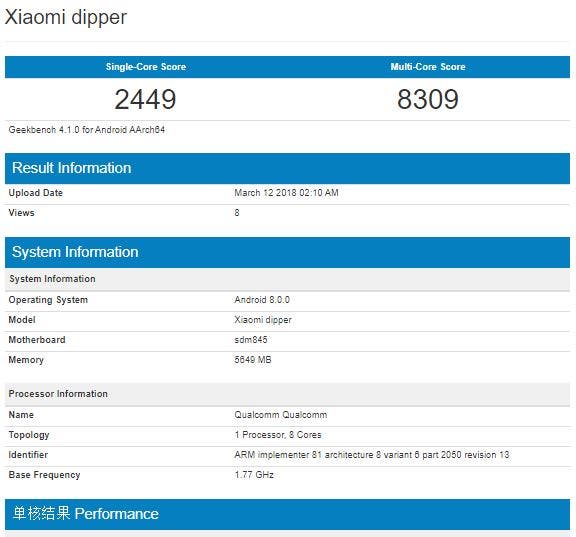 Unfortunately, that is about all the useful information revealed by the Geekbench listings, but we expect to begin to see more of the device in no distant time.

Xiaomi is widely expected to launch its Mi Mix 2s in China on march 27th, same day huawei has set aside for the unveiling of the Huawei P20 series. The last we heard of the Mi Mix 2s is that the device might come the Qi standard wireless charging feature as well as for ARCore.