Earlier this month we reported the Huawei Nova 2 Lite will hit the Malaysian market on March 15. But today, on March 14, this amazing handset was announced in the Philippines. This phone is aiming at younger customers. Therefore, it should come with an attractive appearance and strong shooting capabilities. Let’s get acquainted with its key features and price tags to understand what devices it is going to compete with. 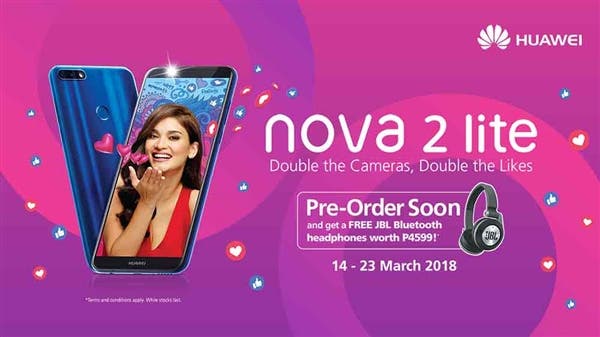 The Huawei Nova 2 Lite is the changed variant of the original model, as the name suggests. It comes with a 5.99-inch 720p screen using an IPS screen technology. Apart from this, the phone is packed with a Snapdragon 430 chip clocked at 1.4GHz. This is the next time when we see a low-end Huawei phone packed with a Qualcomm SoC instead of its own Kirin-series processors. Anyways, the chip is paired with a 3GB of RAM and 32GB of internal storage. The latter also can be expanded up to 256GB via the SD card slot.

On the back, we have a 13+2MP dual-camera. Though we are dealing with a smartphone that comes with two sensors, we understand the second sensor has been put there for only one purpose – to provide the bokeh effect. On the front, it carries an 8MP sensor with a self-timer support.

The Huawei Nova 2 Lite runs on EMUI 8.0 based on Android 8.0. As for connectivity, it supports WiFi but only at 2.4GHz. The rest of features include both the fingerprint scanner and the facial unlock.