While some of us were expecting for more news about the upcoming Helio P40 and Helio P70, the Taiwanese chipmaker surprised everyone at MWC 2018 with a new chipset to sit between the two – The Helio P60.

Today MediaTek held an event in Beijing 798 Art Zone – China – where the P60 was officially released. The chipset manufacturer took the opportunity to reveal more details about its new mid-range contender as well as reveal some of its AI-focused capabilities. 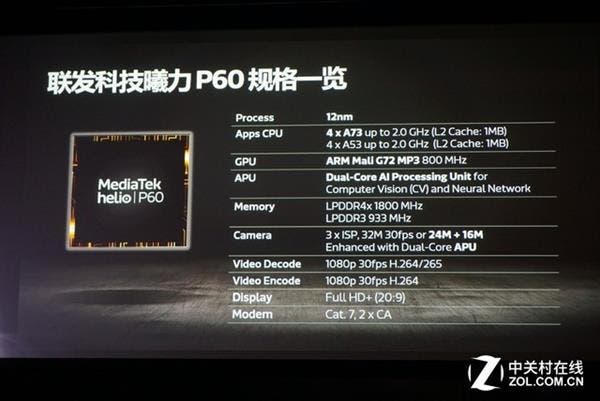 Something that really stands out on this new chipset is the fact that it is built with a 12nm node from TSMC. The smartphones packing the Helio P60 will be the first smartphones from the category to have a power-efficient 12nm build – MediaTek’s biggest rival, Qualcomm, is using 14nm in all their mid-range processors. According to the Taiwanese chipmaker, they’ll continue using 12nm for all 2018 chipsets, but in 2019 they will jump to the impressive 7nm node.

The General Manager of MediaTek’s Wireless Communication Division explained that chipset will bring a whole new level of efficiency for smartphones featuring it. In comparison to the previous generation Helio P30, the P60 will be able to reduce power consumption on intensive tasks by 25%. It’s really important to see such upgrade by MediaTek, as mentioned before the company will skip the flagship grade of processors during 2018. So all their premium chipsets will be sported by upper mid-range smartphones. 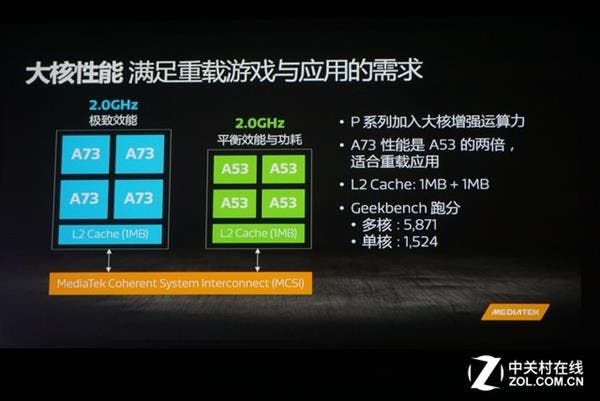 In what concerns to specifications the Helio P60 is composed by a cluster with Four powerful A73 cores clocked at 2.0GHz and another cluster of four power-efficient A53 cores, also clocked at 2.0GHz. Helio P60’s icing on the cake consists in the presence of a Triple-core ISP and a dual-core APU, that will power all the AI specific features, as well as AR and VR. The P60 also bring support for portrait mode and facial recognition. Lastly, but not least, the chipset achieved a decent number of points at Geekbench – 1524 points for Single Core and 5,871 for Multi-core.

The Helio P60 is the first chipset unveiled by MediaTek on this year, the P40 and P70 are also expected to complete 2018’s revenge. After a big flop in the last the year, the company can’t play games during 2018. As reported yesterday, some companies like Meizu, Vivo, and Xiaomi are already showing interest for the Taiwanese newest chipset.

The Helio P60, of course, fixes a gap left by the company last year, with uninteresting chipsets like MT6737 and MT6750 being showcased everywhere. However, if MediaTek really wants to compete with Qualcomm’s midrange gang, they’ll need to rethink their strategy in what concerns to GPL compliance and offering updates for its chipsets. Anyway, Project Treble is already here to show us that even a shady MediaTek device, released with Android Oreo can benefit from Treble.

Next BlackBerry CEO John Chen contract is extended to 2023