It appears the Galaxy A series of Smartphones, which has already been refreshed earlier this year will soon be getting new entrants. Two devices alleged to be the Galaxy A6 and A6+  surfaced on the Gekkbench database a few days back, confirming our suspicion that the A series might be refreshed any sooner. Now, a new smartphone from Samsung running Android 8.1 Oreo has just secured Wi-Fi certification from the Wi-Fi Alliance.

The device is listed as model number SM-A600FN, and while there is no clear mention of the real name of the device, the SM-A600FN model number corresponds to the alleged Galaxy A6 that surfaced on the benchmark database a while ago.

Other than the fact that the alleged Samsung Galaxy A6 will boot Android 8.0 Oreo out of the box, the certification page doesn’t usually give away many details.

As per the previous Geekbench listing, the alleged Galaxy A6 will be powered by Exynos 7870 chipset coupled with 3GB RAM and a Mali-T830 MP1 GPU. the same processor that is expected to power the Galaxy J6 which was spotted recently on the Geekbench database,  while the Galaxy A6+, on the other hand, will ditch the in-house chipset for the Snapdragon 625  with same CPU, Adreno 506 GPU, but with increased RAM size- 4GB. 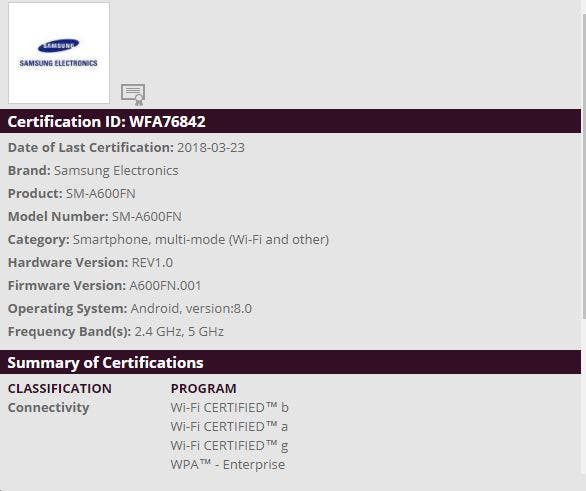 We expect to see more details about the alleged Galaxy A6 in the coming days, either through TENAA, the FCC,  the Bluetooth certification pages or even official announcement.