A few weeks after a Smartphone alleged to be the Moto G6 scaled by the Taiwanese NCC hurdles, another member of the next-gen Moto G series has once again surfaced on the NCC website for the usual approval in that country.

As per information available on NCC website, the alleged Moto G6 plus with model number XT1926-5 Plus was certified on 19 March 2018, and while the NCC doesn’t usually give much away in terms of features, design, and specs, the certification page reveals that the alleged Moto G6 plus will come with support for NFC,  4G LTE Bands, 900MHz and 1800MHz 2G bands and WCDMA.

Leaks about the next-gen Moto G series have been trickling in in the last few months, and we’re bound to see more leaks before the phones actually get announced in some months time.

The next-gen Moto G series is expected to arrive in three different models: the base Moto G6, Moto G6 plus, and Moto G6 play. By tradition, the Moto G6 plus that just passed NCC certification is tipped to be the most powerful of the trio, and from information gathered from previous leaks and benchmark listing, the Moto G6 plus is expected to come fitted with a 5.93-inch full HD+ display, adopting the 18:9 aspect ratio design, and will be powered by the Snapdragon 630 SoC paired with 3GB and 4GB RAMoptions,  as well as 32GB and 64GB of expandable memory capacity. 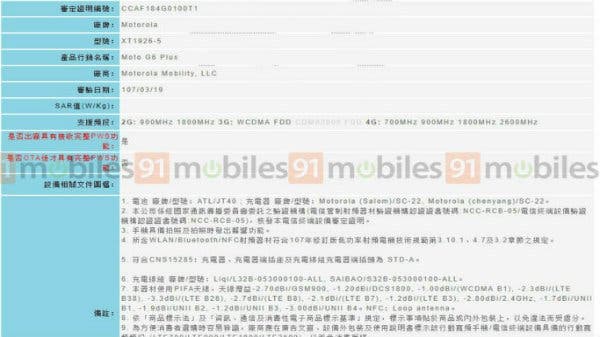 Furthermore, the Moto G6 plus is expected to house a 16-megapixel selfie camera with LED flash, while a dual camera setup believed to be a 2-megapixel primary sensor and a 5-megapixel sensor will sit at its rear. It will run on Android Oreo out of the box, while a 3,250mAh battery will keep it light.

The device was earlier rumored for MWC unveiling, that however didn’t happen, and we are yet to get a new launch date.

Previous [GizPoll of the Week] How Much RAM Is Sufficient For Your Android Smartphone?

Next Alleged Samsung Galaxy A6 gets certified by Wi-Fi alliance