A new Samsung Galaxy phone alleged to be an unannounced Galaxy J series member has surfaced on the GeekBench database hours after Samsung officially announced the Galaxy S9 duo, its accompanying DeX Pad as well as its blood pressure monitoring app.  It is the third phone allegedly belonging to the J series family that we have seen on the GeekBench site in recent time, following the listing of the alleged Galaxy J4 and the Galaxy J8.

The device with the model number SM-J600F as revealed by Geekbench appears to be a mid-ranger. The device will be powered by the Octa-Core Exynos 7870 14nm SoC coupled with 3GB RAM and will run Android Oreo out of the box.

Nothing else has been revealed by the GFXBench listing, but there are indications that it might come with a 1080p screen since the listed SoC supports a maximum screen resolution of 1,920×1,200. 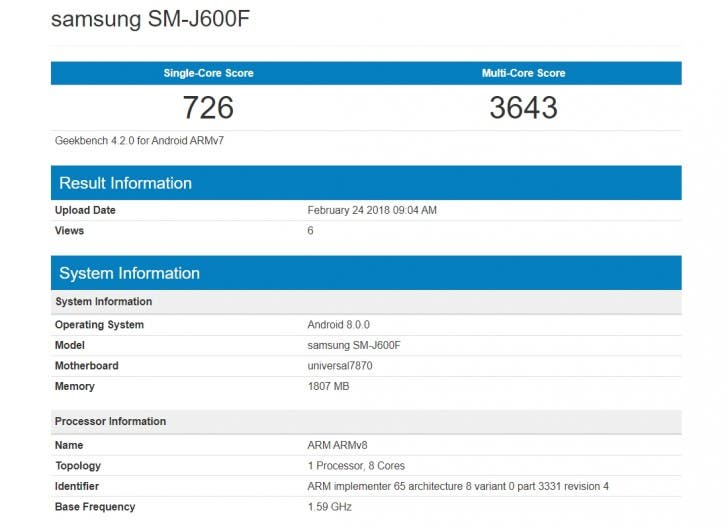 Samsung was previously expected to announce the Galaxy J8 2018 and the Galaxy J4 at the MWC 2018, but it now appears that won’t be happening anymore.

Samsung Galaxy J6 Plus and J4 Plus launch imminent, get Bluetooth certifications