The T-Mobile Sidekick, but definitely not how you remember it.

I bet not many of our readers remember the dear old T-Mobile Sidekick. The thing was a product much ahead of its time, with a flip out screen that had a cool 180 degree motion. The amount of celebrity endorsement it got was unheard of, and the OS it ran would eventually become what we now know as Android. It wasn’t really all that great of a device, but it was still a precursor to many of today’s smartphones.

So, why bring this up now? It’s because T-Mobile’s latest ‘announcement’ is a reincarnation of the Sidekick, but now in shoe form. Dubbed the T-Mobile Sidekicks, these shoes come with a plethora of smart features, putting even some recent phones to shame. To start with, the T-Mobile Smartshoephone features a flip-out screen that pops out from the side of the sole. 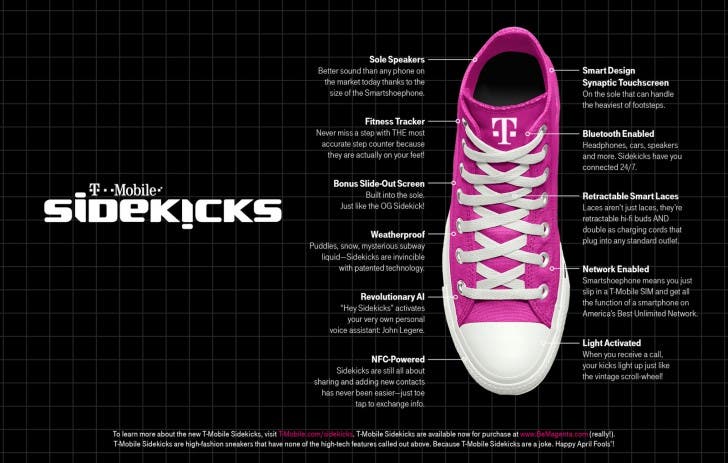 There’s also a display that takes up the entire bottom of the sole of one shoe. The other sole features “Sole speakers” and retractable Smart Laces that double as earbuds. There’s even AI on board with the “Hey Sidekicks” voice assistant, none other than T-Mobile’s legendary CEO, John Legere. As expected, there’s a fitness tracker on board, as well as NFC support that allows you to share contact info with others by tapping the ends of your Sidekicks together.

Of course, this is a completely legitimate April Fools joke, though there is some truth here. The shoes are actually available to purchase from T-Mobile for $65 a pair. They’re magenta hi-top Converse-lookalikes with the words “T-Mobile Sidekicks” on them, though the logo kind of makes it uglier in my opinion. They can’t actually do anything smart, but at least it shows T-Mobile has a sense of humor.