The case related to Smartisan is odd. This manufacturer has launched a few smartphones that could win customers’ hearts in a short time period. The latest of them is the Smartisan Nut Pro 2. But once it was out we haven’t seen anything new from this company. There have been rumors as the company is working on a new model named the Smartisan Nuts 2. Moreover, it’s been said the phone will make its way on April 9. At least, the leaked posters were claiming a new smartphone codenamed as the Smartisan Oscar will be announced on this date. Today, the company officially announced it will hold a new product launch conference at the Beijing Olympic University Gymnasium on April 9 and that device will be the Smartisan Nuts 3. 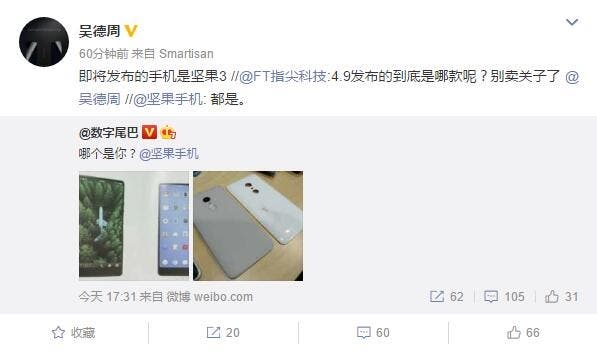 Unfortunately, Smartisan’s CTO Wu Dezhou didn’t reveal anything about the Smartisan Nuts 3. But a new smartphone with a model number of OC105 has been approved by the Ministry of Industry and Information Technology on February 27, 2018. So there is every reason to think we are talking about the same phone.

We tend to think the Smartisan Nuts 3 will come with an identical design as its predecessors, but it will adopt the trendiest 18:9 aspect ratio screen. Probably, it will be using the successor of the Snapdragon 660 found on the current model. Thus, most likely, it will be packed with a Snapdragon 670 chip.