The first quarter is over, and it’s quite interesting to take a look at the largest smartphones market in the world, China. There have been announced many new models in those three months, and it’s interesting to know whether they affected the overall performance and popularity. This list is conditionally called ‘Top 30 Product Rankings for China Mobile Phone Market in the 13th Week of 2018.’

Note: this list refers to the popularity, not the sales. 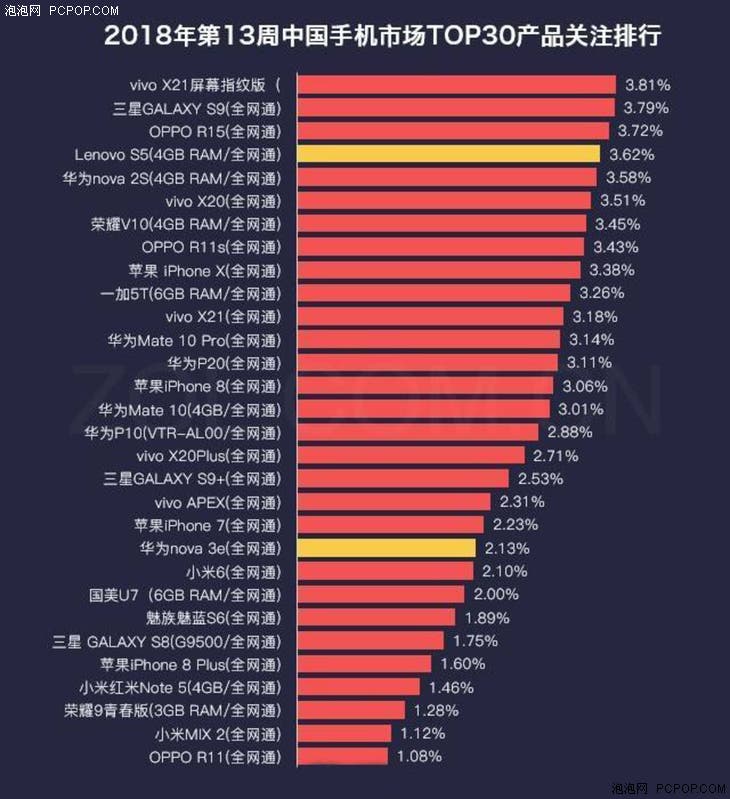 Not surprisingly, the list is led by the VIVO X21 UD. This is the world’s second smartphone coming with an on-screen fingerprint scanner after its sibling, the VIVO X20 Plus UD. Moreover, it’s one of the world’s first devices coming with an unusual 19:9 aspect ratio that means its screen occupies more space on the front panel. Therefore, it provides way better viewing experience. Many may think, there is nothing surprising about this handset and its performance. But the thing is the VIVO X21 Underdisplay Fingerprint version was announced only on March 19. Thus it took only two weeks to outrun all of its competitors in terms of popularity.

The aforementioned model is followed by the Samsung Galaxy S9. It yields the VIVO’s flagship by 0.02%. So we can state VIVO could make a model fully comparable to the world’s toppest smartphone. As for the Galaxy S9, it’s the first Snapdragon 845-powered smartphone made by a top brand. So it’s logical why it is in the second position.

The third place is occupied by another amazing smartphone, the OPPO R15. Like the VIVO’s model, it was announced in March. So it took too little to become a hot model in China. Not accidentally, it’s thought to become the hero of 2017’s first half. The Huawei P10 Pro dropped to the middle of the list, while the Xiaomi models are at the bottom.

Previous OnePlus 5T Out of Stock at Official Site: Space Freeing For OnePlus 6 is Over