Today, at 10 AM the Xiaomi Mi MIX 2S officially went on sale. But as expected, it took about five minutes to sell out completely. While many may think Xiaomi still continues the monkey strategy, we should state this is a real progression in comparison to the last models. 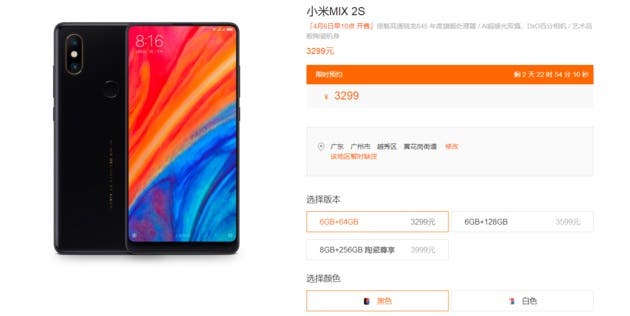 We know any product launches with Xiaomi brand on board gets a status of ‘out of stock’ quickly. It refers to all products without exceptions. Today, another Mi product in face of the Xiaomi AI mini Speaker went on sale and was sold out instantly. But if the latter costs 99 yuan ($16), the Xiaomi MI MIX 2S is priced at 3299 yuan ($525). Moreover, the former product was sold out in 10 minutes, while the latter did in 5 minutes. Thus there was a time to get your hands on it.

In comparison to the first-gen Xiaomi Mi MIX, the first bunch of this device got out of stock in 10 seconds only. The second bunch did the same in 30 seconds. The white version was sold out instantly. As for the Xiaomi Mi MIX 2, it took 58 seconds to get this status. So when looking at the new sell time period, we can say there is a real progression.

Actually, the Xiaomi Mi MIX 2S is the first in many aspects. Say, it’s the first Chinese smartphone to come with a Snapdragon 845 chip. It’s the first Mi-series handset to sport a dual-camera. There are tons of impressive features making this phone stand out. But the biggest selling point and the most attractive feature is the pricing. As we said, the 6+64GB variant is priced at 3299 yuan, while the higher model with a 6+128GB memory combination costs 3599 yuan ($572) and the 8+256GB variant is available at 3999 yuan ($636).