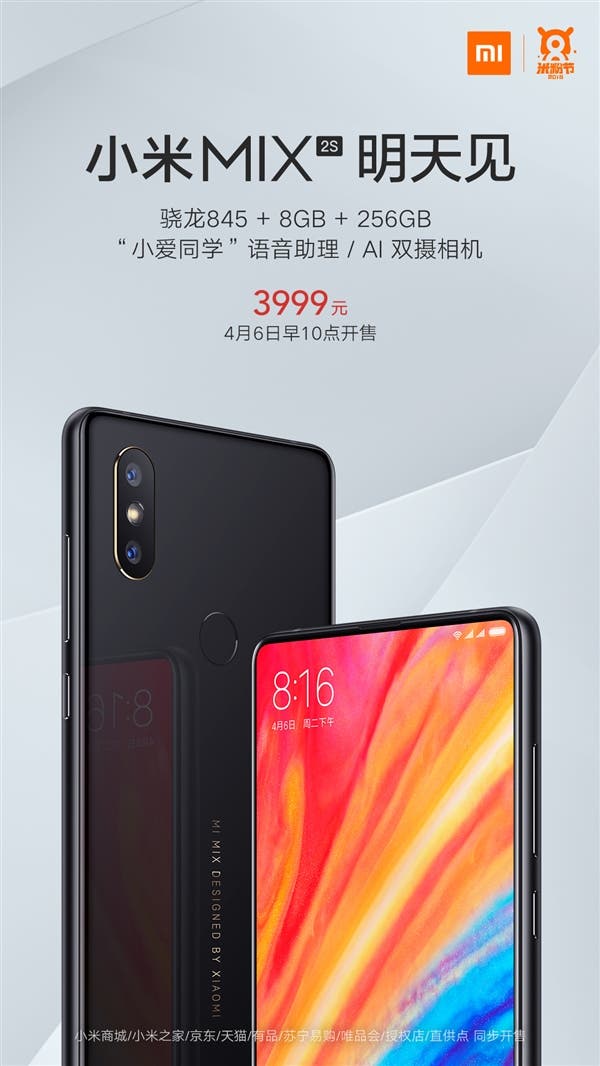 Actually, the Xiaomi Mi MIX 2S uses the same appearance as its previous model. Thus it comes with a four-curved ceramic body with a middle frame made of a 7000 series aluminum alloy material. There are two color options including white and black.

As for the specs list, the Xiaomi Mi MIX 2S sports a 5.99-inch full-screen with a resolution of 2160 x 1080 pixels and an aspect ratio of 18:9. Under the hood, it carries a Qualcomm Snapdragon 845 chip paired with the aforementioned memory combinations as well as a 3400mAh battery, and it runs on the MIUI9 system.

Besides the hardware upgrade, the Mi MIX 2S is packed with a dual-camera on the back that uses 12MP wide-angle and 12MP telephoto lenses. The camera module has a unit area of 1.4 microns. It supports Dual PD full-pixel dual-core focusing, portrait mode, and AI beauty. At the DxOMark, a well-known camera evaluation agency, it scores 101 points, which is in the same level with the iPhone X. Plus, the phone also comes with the new AI voice assistant. It can perform up to 100 kinds of voice manipulation skills to solve the user’s various problems.

Next Gearbest's 4th Anniversary Promo - Here's how they thank you