A new/unknown smartphone from Samsung has surfaced online following the release of the Galaxy J7 duo and amidst the Galaxy Note 9 leaks and rumors. An unknown Samsung Galaxy handset has passed through TENAA, China’s version of the FCC, leaving us with images and a few basic details of the device,

According to the listing, the unknown device has its model number as “SM-G8850” and it is said to have a compact design. The TENAA listing reveals that the SM-G8850 measures 147.7×68.7×8.4(mm), and it is said to have an overall screen size of 5.8-inches, while the actual display is 5.6-inches. It appears to be made of metal glass combo and comes fitted with a dual 8MP rear cameras, a rear fingerprint sensor, and an 8MP front-facing sensor.

The TENAA results also reveal that the Samsung SM-G8850 will be a dual SIM device, will run Android 8.0 Oreo out of the box, and will be powered by a 3000mAh battery. It is listed with an unknown Octa-core CPU with up to 2.5 GHz clock speed coupled with 4GB/6GB RAM and unknown storage size expandable up to 256GB. 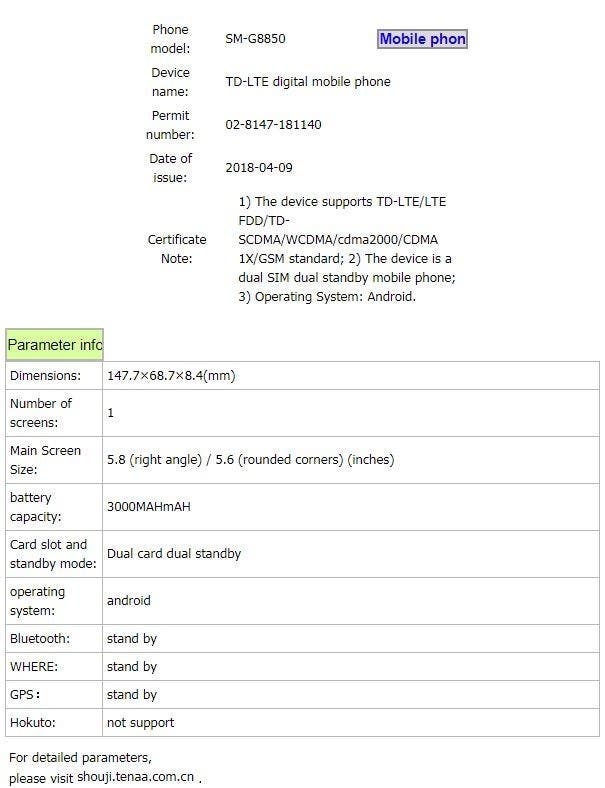 The further details and images are currently not available, but that should happen in few a hours time, and with its listening TENAA, then its official announcement shouldn’t be far.

Next Huawei Honor MagicBook To Launch On April 19