May just started and of course, OnePlus is busy with all the preparations for the OnePlus 6 release. The bezel-less top-notched smartphone is confirmed for the May 17th date, and today the retail package of the OnePlus 6 Avengers Edition just leaked on the web. The smartphone will be a joint adventure between OnePlus and Marvel and will be exclusively sold through Amazon in India, until the moment we don’t know if its availability will be expanded to other countries.

As can be clearly spotted through the leaked picture the box will have a predominant dark grey tone covering all the surface, however in the center there is a bright glossy Avengers Logo, on the sides we can see the OnePlus 6 and the company’s logo. Although we can’t see through this leak, we suppose that on the bottom part of the box there is a complete spec sheet of the smartphone. 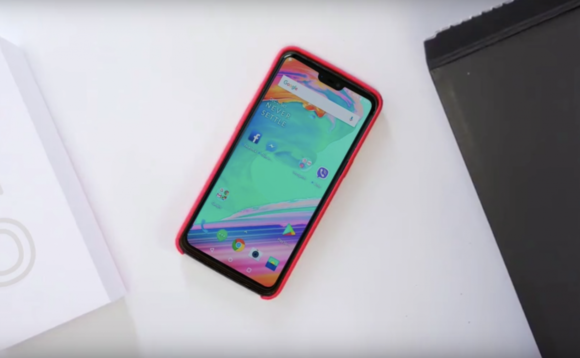 In what comes to specifications, the OnePlus 6 Avengers Limited Edition is expected to feature the same specifications of a regular OnePlus, however with a different color scheme and a package of wallpapers featuring the new Avengers movie. The Snapdragon 845 will be running the show here alongside 8GB RAM and 256GB of non-expandable storage. On the rear, the smartphone will bring a dual-camera setup just above the fingerprint sensor.

On the front, the smartphone will feature a 6.3-inch bezel-less display with a top-notch making a presence. So this will definitively be the first OnePlus flagship to join up the controversial “Notch” gang. We are not sure what will be the remaining details of the OnePlus 6 design, despite the leaks, the company should offer new design variants for the smartphone, such as a OnePlus 6 with a metal-brushed texture in the rear.

When it comes to price and specifications the Avengers OnePlus 6 is expected to go on sale towards the end of May alongside the standard OnePlus 6. The pricing tag should reach the whopping amount of $800 making this the most expensive OnePlus smartphone to the date.

Next OnePlus 6 Listed on TENAA, Reveals all of its Specs